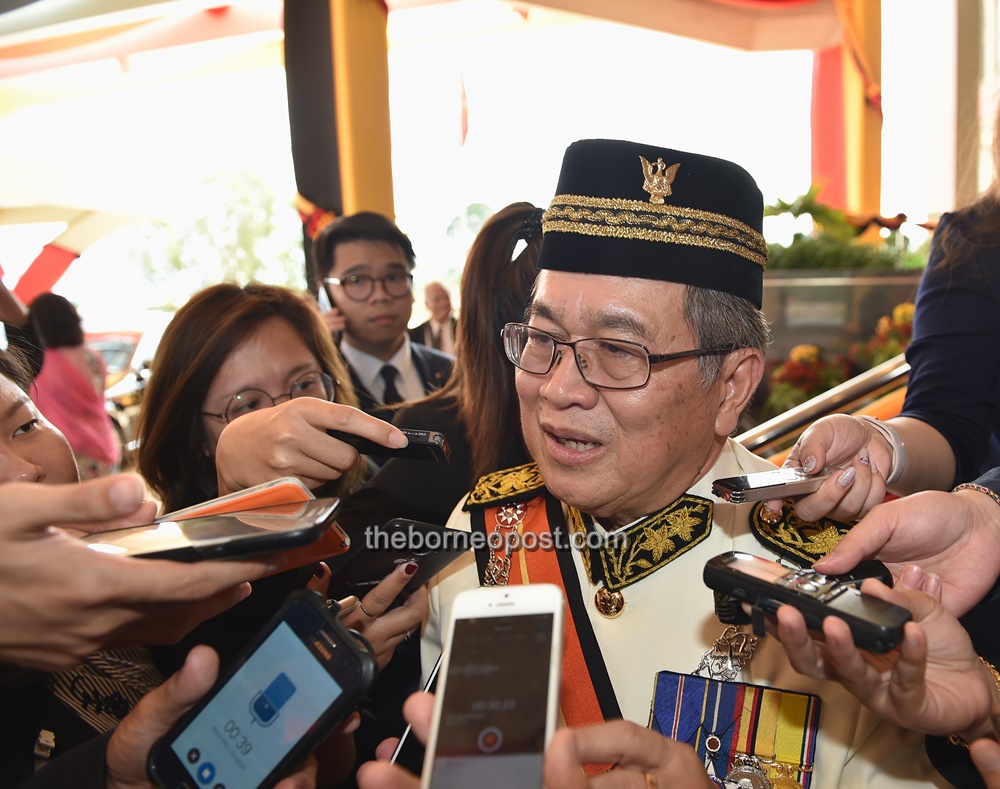 Uggah speaking to reporters after the opening ceremony of DUN Sitting on Monday. – File photo

KUCHING: The State Legislative Assembly today passed the Land Code (Amendment) Bill, 2018 with two amendments that will see the limitation of 500 hectares on the native territorial domain (NTD) be increased to 1,000 hectares (ha) and land title be granted not just in perpetuity but free of premium, rent or other charges.

Deputy Chief Minister and Minister for Modernisation of Agriculture, Native Land and Regional Development, Datuk Amar Douglas Uggah Embas when reading the Bill for third time, revealed that 35 members of the house debated and 22 of them expressed concern over the 500 hectares limit on the native territorial domain.

“Twenty-two (22) Honourable Members have expressed their concern that the limit of five hundred hectares a native community may claim as native territorial domain under Section 6A may not be fair and just as some communities’ requirement and needs may exceed this threshold. They have suggested/proposed that the limit be increased to one thousand hectares,” Uggah said.

Uggah also said Layar, Meluan, Ngemah, Piasau and Bukit Semuja assemblymen have also proposed that the issuance of the native communal title be granted not just in perpetuity but free of premium, rent and other charges.

“This had always been the intention of the Government. However, to make the Government’s intention clearer, this will be reflected through an amendment to the Bill, of which a motion to do so has been circulated to all the Honourable Members of this House,” he stressed.

Uggah praised the government backbenchers for their positive contribution in the debate on the Amendment Bill.

“They have participated in the debate professionally and objectively reflecting their understanding of the proposed Amendment Bill. They all aimed at contributing to shaping the Bill so that we introduce a law that help solve the problem in relation to native territorial domain,” he said.

Uggah said the Government was expecting a fiery and intense debate, but there was none, as the opposition members were clearly confused.

The main objectives of the Land Code (Amendment) Bill, 2018 are to give Native Territorial Domain the force of law and to issue Native Communal Title in perpetuity, which will confer on such title a proprietary right to the native territorial domain.

Uggah said once such a title is issued, it will be treated as any title granted under the Land Code, and the proprietary interest in that title would be indefeasible by virtue of section 132 of the Land Code.

This will resolve the problem arising from the Federal Court’s decision in TR Nyutan’s case relating to Provisional Leases; and to repeal provisions in the Land Code (Amendment) Ordinance, 2007 which have not come into force, resulting in for example, the reinstatement of Section 5(2)(f).

The Bill, Uggah stressed, re-affirms the principle of inclusiveness as Sarawak have more than 30 native groups, each with their own customs and culture.

“For that reason, the term Native Territorial Domain is used rather than its equivalent, Pemakai Menoa and Pulau Galau for Iban, Cari Makan for Malay, Tu’an for Bidayuh, etc.,” he explained.

Uggah took Krian and Tanjung Batu assemblymen to task for accusing that the Bill only seeks to confer usufructuary rights which is only a right to use and not to own the land.

“It is apparent that both Members do not understand the Bill and are confused. Let me clarify for their benefit once again. The term ‘usufructuary’ is merely descriptive of the customs and practices which would be legally recognised by the amended provisions to establish ownership rights to a native territorial domain.

“This is giving ownership of the native territorial domain to the community. In other words, they own the territorial domain, not just the right to use. I hope this will clear the doubt on this issue. This is the product of the process,” Uggah explained in greater detail, and called upon the duo to check with Batu Lintang assemblyman See Chee How to vouch the difference.

“There is a proposal for a committee or commission to be formed to assist the Department of Land and Survey in verifying the claim and area for native territorial domain. We will study this proposal,” he said.

On the allegation made by Tanjung Batu representative, that this amendment erodes the NCR land of the natives, Uggah said that this is not true.

“Let me emphasise that native territorial domain under Section 6A is over and above the right of a native or native community to claim NCR under Section 5. Therefore, it is not true that the natives will lose land ownership by this amendment as alleged by the Honourable Member for Tanjung Batu. His assertion reflects his lack of understanding of this amendment,” Uggah said.

On the statement made by Batu Lintang and Krian assemblymen that it would be better to issue a title for native territorial domain under Section 18 rather than under the proposed new Section 6A, Uggah said the new Section 6A and Section 18 cater for two different situations.

“Section 18 provides for the issuance of a title to an individual who has occupied and used any unalienated land in accordance with rights acquired by customary tenure amounting to (individual) ownership of the land for residential and agricultural purposes, whereas under the proposed new Section 6A, a native communal title is to be issued to a native community in respect of native territorial domain (virgin jungle) in which the native community have exercised and is exercising usufructuary rights,” Uggah said.