Tuesday, July 27
You are at:Home»Business»Rubber glovemakers may benefit from latest US-China trade spat 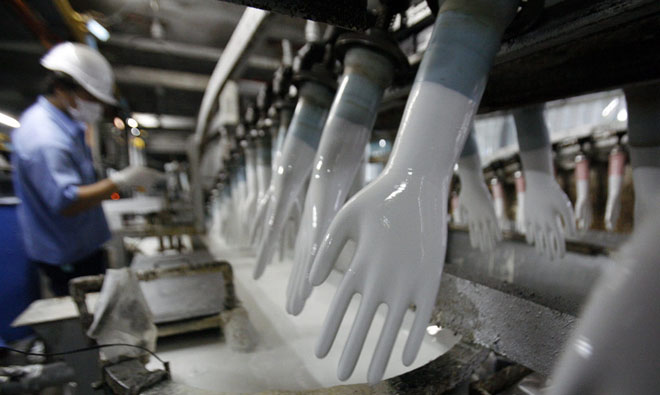 Rubber or plastic gloves are now on the new list of US$200 billion worth of Chinese goods on which the US wants to levy a 10 per cent tariff.

KUCHING: Malaysia rubber glove manufacturers could be one of the beneficiaries in the latest trade spat between the US and China, analysts have projected in the latest rubber products sector update.

According to Affin Hwang Investment Bank Bhd (Affin Hwang), rubber or plastic gloves are now on the new list of US$200 billion worth of Chinese goods on which the US wants to levy a 10 per cent tariff.

In Affin Hwang’s view, the 10 per cent tariff on medical gloves (rubber or synthetic and plastic) will certainly hamper China manufacturers’ competitiveness, as gross profit margins for the efficient Malaysia manufacturers are only at 15 to 20 per cent.

“We believe that Malaysia exporters will be able to benefit from it, building on their 60 per cent market-share base,” the research firm said.

“The introduction of the tariff is also likely to derail China manufacturers’ expansion plans to produce nitrile gloves in the near term.”

It added that the US consumes 30 to 35 per cent of the medical gloves that the world produces.

Affin Hwang highlighted that 70 per cent of the medical gloves exported from China into the US are vinyl gloves, with the remaining 30 per cent being rubber or synthetic rubber gloves.

The research firm believed that the price hike would help to build a better case for distributors, which are already pushing their clients to switch from vinyl gloves to other alternatives like rubber gloves, due to the narrowing price differences.

“If China were to continue with its strict environment policy during the winter months (starting in October), we expect vinyl glove prices to rise further.”

Domestically, Affin Hwang was not concerned about the “Big 4” expanding their capacity by 10 to 15 per cent, despite historical demand growth of eight to 10 per cent year on year (y-o-y).

“We see industry players being rational and phasing out their expansion plans to protect margins if needed.

“We also believe that the historical demand is not a good indication of the current demand, as it does not factor in the additional demand from the switch from vinyl gloves.”

Overall, Affin Hwang reaffirmed its ‘overweight’ call on the sector, despite the rubber-glove makers’ market capitalisation having increased by over 23 per cent year to date (YTD).

The research firm believed the key re-rating catalyst for the sector will be dependent on solid earnings-growth delivery.

“There could be further upside risk to the sector, if the US does go ahead with the 10 per cent tariff on rubber gloves from China.

“Downside risks include strong movement in the ringgit and higher-than-expected production costs.”