Wednesday, June 3
You are at:Home»Features»Going bald to raise cancer awareness 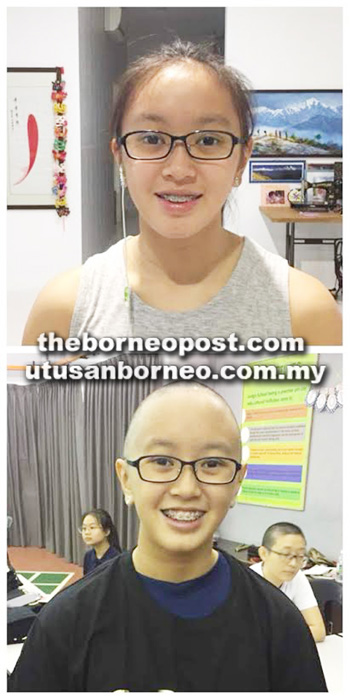 Amanda before and after going bald

That was what a girl told herself before she was about to have her head shaved.

When the buzzing sound of the clippers got nearer and finally descended upon her hair, she felt a wave of confusion – somewhat thrilling – sweeping over her.

“This is it,” she said to herself with bated breath, as the razor-sharp clipper mowed away her crowning glory.

“There was no going back. The moment I got off the barber’s chair, I would be a girl walking around with a bald head. But it’s okay. I’m doing it for the kids.”

Fifteen-year-old Amanda Ong was one of the few young girls who admirably had the courage to go bald for a good cause.

She took part in a recent Go Bald Campaign in which her school – Lodge International Secondary School – and also participated in one of its community WeGive projects.

The campaign was carried out throughout Sarawak to raise funds for cancer-stricken children as well as raise awareness of childhood cancer.

Amanda said she had seen pictures of little children, including girls, who became bald due to the cancer treatment they received. She could imagine how they must have felt.

“I never stop feeling I must do whatever I can for them. They need a lot of support from family, friends and well-wishers. They may never be able to live normal lives and I empathise with them deeply.

“So when the Go Bald Campaign came around and my school announced it was also going to take part, I knew the moment had come and I shouldn’t let it slip away. It was a golden opportunity to do my bit for children with cancer.”

Apart from raising funds, Amanda believes the campaign also let her in on how the young patients felt about losing their hair.

Moreover, she said by going bald herself, she would be showing the patients she looked like them and they were not alone, adding, “It would be a form of moral support.”

Amanda knows of two other girls from her school who had gone bald for the same cause.

Another friend, who migrated to Australia a few years ago, had also done it. She was walking around bald for about a year before moving overseas.

Amanda drew a lot of inspiration from this friend, saying she admired how the latter was able to handle her bald image so gracefully.

She revealed there was another incident, which made her even more determined to support the fight against cancer. 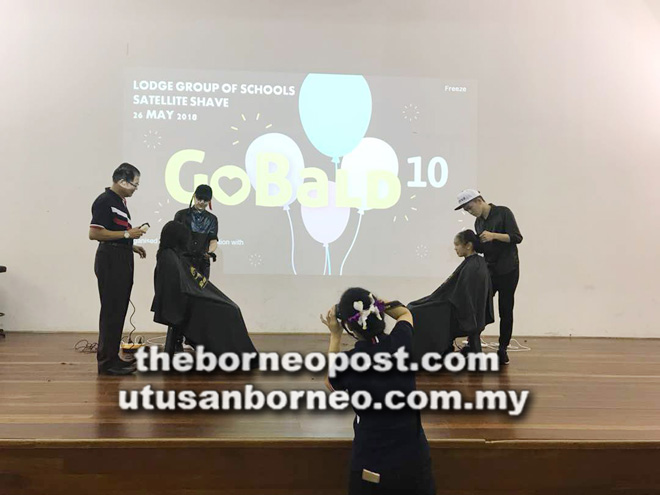 The campaign in progress.

She said just before her school announced it would be taking part in the Go Bald Campaign, her grandfather was diagnosed with cancer.

“I was distraught. So I thought if this disease is, indeed, such a horrible enemy of humanity, then I would try and raise awareness of it in the only way I could.

“The disease was also hurting a very dear family member and I wouldn’t stand idly by without a fight. If I couldn’t save my beloved grandpa, I would, at least, be trying to do so for others.”

Amanda said her family knew she was joining the campaign and were very supportive. In fact, one of her brothers – Derrick – also signed up to give her moral support. 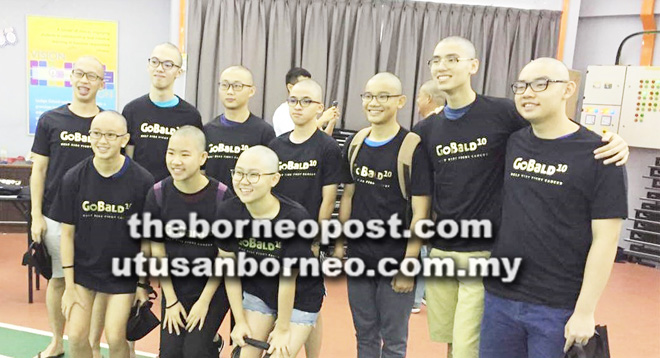 Amanda (front left) and her brother (back left) with fellow participants of the Go Bald Campaign.

But for the boys, she noted, going bald wasn’t a very big deal because males with shaven heads are quite common.

“In fact, for them, sporting a bald head could even be a kind of fashion statement,” she chuckled.

“But for girls, it’s a different story. That was why my close friends couldn’t believe when I first told them I was going bald.”

Amanda shared that after shaving her head, she did feel somewhat weird when she first looked into the mirror – as if the reflection wasn’t her.

Although she felt like laughing, she quickly realised it was no joking matter as helping cancer-stricken children is a serious mission.  “No regrets, I’m quite happy to go bald for a good cause,” she said.

When Amanda turned up in school the next day with her clean shaven look, many of her friends and schoolmates couldn’t believe their eyes.

“Well, as expected, there was lots of good natured teasing and of course, praises as well, but generally, everyone was very supportive,” she added.