Tuesday, June 15
You are at:Home»News»Nation»PH speeds up election of backbencher leader to avoid lack of quorom 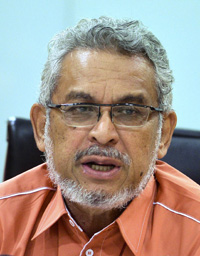 KUALA LUMPUR: The Pakatan Harapan (PH) government will speed up the election of a backbencher leader to avoid a recurrence of the postponement of the Dewan Rakyat sitting due to the lack of quorom as happened yesterday, said Federal Territories Minister Khalid Samad.

He said that at the moment all component parties of the PH had their respective Chief Whip and the election of a chief whip would coordinate the action of all PH Members of Parliament in the House especially in determining the presence of MPs.

Khalid, who is also the director of communications for Parti Amanah Negara (Amanah), said the selection of the backbencher leader was still at the discussion stage and would only be finalised at the next meeting of the PH Presidential Council.

“For the time being, I feel all the PH chief whips could discuss in selecting a leader from among them until the next Presidential Council meeting is held.

“The PH Presidential Council would only meet again within one month, as such the temporary appointment is necessary until the selection is finalised,”he said when approached by reporters at the Parliament lobby here yesterday.

On Tuesday, the Dewan Rakyat sitting had to be postponed for two minutes as there was a lack of quorum. The matter drew the attention of a former Cabinet minister Tan Sri Dr Rais Yatim through his Twitter account which stated the best way of overcoming the problem of the lack of quorum in the Dewan Rakyat was by deducting the MP’s monthly allowance according to the rate ordered by the Parliamentary Select Committee.

Rais also suggested that the names of MPs described as ‘lazy’ be exposed in the press and social media. — Bernama