Wednesday, March 3
You are at:Home»Business»Malaysia should ratify CPTPP for new economic opportunities 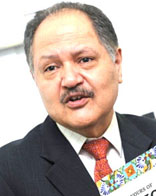 KUALA LUMPUR: Malaysia should ratify the Comprehensive and Progressive Agreement for Trans-Pacific Partnership (CPTPP) as the pact is the best platform for local companies to access economic opportunities in a new region, says Mexican Ambassador to Malaysia.

The envoy said he encouraged newly-minted International Trade and Industries Minister Darell Leiking and Malaysia to ratify the CPTPP, a revision of the original Trans-Pacific Partnership (TPP) agreement which the United States withdrew from in January 2017.

“We (Mexico) think protectionism and trade wars are not the ways to conduct business in a globalised economy. That is why Mexico was the first country to ratify the CPTPP, followed by Japan and Singapore,” he told Bernama yesterday.

The aim of the pact is to reduce trade barriers and provide access to a combined market of 500 million people with a gross domestic product of US$10 trillion (US$1 = RM4.05).

The CPTPP will come into force two months after six of the 11 participating countries ratify it, and Canada, Australia, Peru, Mexico, Chile and Vietnam are all committed to ratifying the pact this year.

Corona said the trade agreement would provide Malaysia a much better position to seize business business opportunities not only with Mexico but also with other countries in Latin America, including Chile and Peru.

“Malaysian companies should see the pact as a good opportunity for them to play in a premier league. If Malaysia does not ratify the CPTPP, then it will watch the game from the bench.

“I understand that the new government is reviewing and analysing all the trade agreements made by the previous government but I think for the benefit of Malaysia, it will be very important to get into this ambitious deal and have a real free trade agreement (FTA),” he said.

On July 10, Darell was reported as saying that the government’s stand on the CPTPP would be finalised soon by the Cabinet following Prime Minister Tun Dr Mahathir Mohamad’s call for a review amid concerns that smaller economies, such as Malaysia, were disadvantaged under the current terms.

Corona said the CPTPP would allow Malaysian businesses greater opportunities to tap the Mexican market with its population of 126 million and also establish joint-ventures with Mexican companies.

“We (Mexico) are one of most open economies in the world. We are part of the North American Free Trade Agreement and we have 40 different FTAs that give us access to 44 countries,” he added.

Corona said diversification is one of the main challenges faced by Malaysia and it needs to go beyond traditional markets such as China.

The Mexican envoy said trade between Mexico and Malaysia in 2017 amounted to US$8.6 billion even without a FTA.

“This reflects the importance of Malaysia as a trade and investment partner for Mexico even without a FTA. If we have FTA, trade will increase exponentially,” he said. — Bernama