Sunday, May 16
You are at:Home»Business»Establish specific mission in EU for palm oil industry 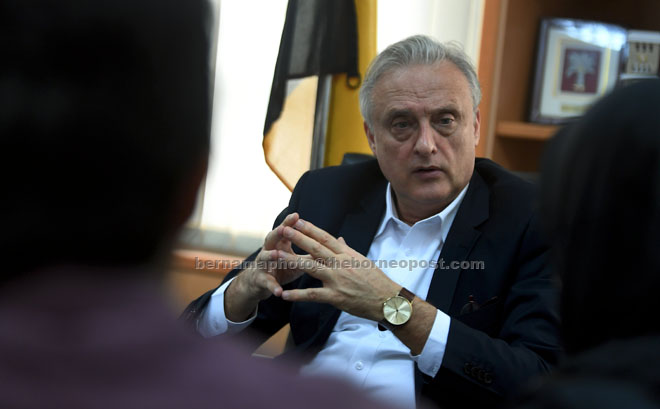 Dargent who mooted the idea of setting up the mission said the need to have a dedicated embassy at the political and economic union of 28 member states (EU) – located primarily in Europe – was envisaged as playing a vital role for both Belgium and Malaysia. — Bernama photo

KUALA LUMPUR: In strengthening various engagements between Malaysia and the European Union (EU), specifically in seeking a better solution to the much-discussed palm oil industry, it is imperative that a specific mission to the EU be established to help solve numerous challenges facing Malaysia’s palm oil industry.

Belgian Ambassador to Malaysia, Daniel Dargent who mooted the idea of setting up the mission said the need to have a dedicated embassy at the political and economic union of 28 member states (EU) – located primarily in Europe – was envisaged as playing a vital role for both Belgium and Malaysia.

“I think it would be a good point for this country to open up an embassy that is specifically in charge for the EU, like the one EU has in Malaysia, currently.

“EU is an official body and there are many embassies credited to EU. Therefore, it is best to establish one in order to facilitate more direct links and contacts with EU counterparts (not just amongst foreign ministries) for exchanges and enhancing progress,” he told Bernama.

Moreover, with the new Malaysian Government, he said more positive outcomes and discussions could be made possible to obtain more consensus on related palm oil issues.

“Things should go in the right direction in the coming months with this new government. They are open and positive to work with the EU,” he added.

He was responding to recent remarks by France’s Ambassador to Malaysia, Frederic Laplanche in an interview with Bernama, which stated that public opinion regarding palm oil in the EU was still negative due to concerns on climate change, environmental protection and biodiversity conservation.

Shamsul Iskandar said Malaysia would like to request Laplanche and the entire EU diplomatic community in Malaysia to continue to work with the Primary Industries Ministry to better inform detractors of the palm oil industry.

On the EU’s negative public opinion concerning climate change and environmental aspects, Dargent noted Malaysia had its own practices in dealing with such matters.

“As far as environmental issues are concerned, I think it is a global question where every country involved has its own way of protecting the planet and biodiversity issues of their land.

“I personally think, with the new Malaysian Government today, more discussions and new approaches can be pursued,” he added.

In January, the European Parliament voted in favour of a draft law on renewable energy that called for the use of palm oil in biofuels to be banned from 2021, a decision that could affect millions of oil palm growers in Malaysia, Indonesia and Thailand.

The EU reasoned that the widely-used commodity would derail Europe’s ambitions to green its transport sector if used as biodiesel.

Recently, Malaysia’s palm oil industry received a brief respite after the EU softened its stance on the use of palm oil among its member countries by omitting any mention of the commodity in the EU’s updated Renewable Energy Direc­tive.

The omission came after an agreement was reached during a “trilogue” involving the EU Parliament, European Council and European Commission on June 14. According to an earlier proposal, a palm biofuel ban by 2021 was to be included in the directive.

The commodity is Malaysia’s top export to the EU, representing 49 per cent of the region’s imports. — Bernama