Friday, July 10
You are at:Home»World»Poll body: ZANU-PF wins most seats in Zimbabwe parliament 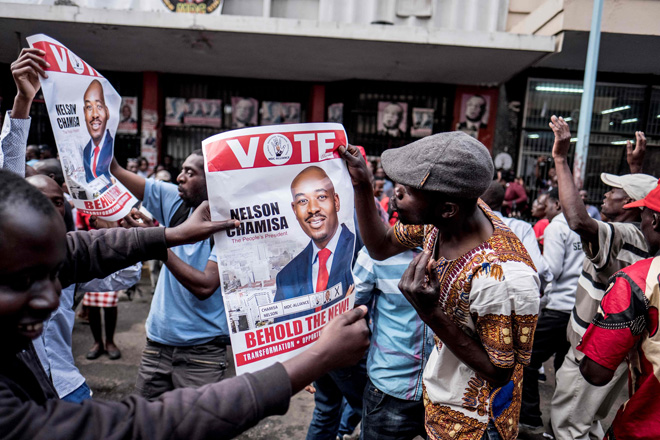 Supporters of Chamisa hold his campaign posters as they gather outside the MDC Alliance’s headquarters in Harare. — AFP photo

EU observers are due to give their preliminary report on Zimbabwe’s election later yesterday, two days after the vote — the first ballot since Robert Mugabe was ousted after 37 years in power.

With elections under Mugabe marred by fraud and often deadly violence, his successor President Emmerson Mnangagwa, 75, promised a free and fair vote and invited international observers.

“The Zimbabwe Electoral Commission (ZEC) has announced a further 50 National Assembly results, bringing the total so far to 153.

There are 210 seats in the national assembly lower house.

MDC did not immediately respond to the parliamentary results but earlier yesterday party leader and presidential contender Nelson Chamisa, 40, said the presidential results were being faked.

“We won the popular vote and will defend it!”

If no presidential candidate wins at least 50 per cent of the ballots cast in the first round, a run-off vote is scheduled for Sept 8.

Observers from the Southern African Development Community and the African Union will also deliver reports on the polls.

Opposition Movement for Democratic Change (MDC) supporters started celebrating Tuesday after a senior party official said that the party was sure Chamisa had won and that if he was not declared victorious, it would “announce our own results”.

That apparently prompted Home Affairs Minister Obert Mpofu to warn that anyone illegally announcing results would ‘provoke the wrath of the law and risk being sent to jail’.

The electoral commission has warned that results of the presidential first round may not be known until Friday or even Saturday and would not be released until tallies were received from all 10,985 polling stations.

“We are nowhere near where we expected to be, so I can quite see us going into the fifth day which is allowed by law — but we are working flat-out,” commission chairwoman Priscilla Chigumba told journalists in the capital. — AFP