Friday, December 3
You are at:Home»World»Seoul deploys warship to Libya to secure release of S. Korean 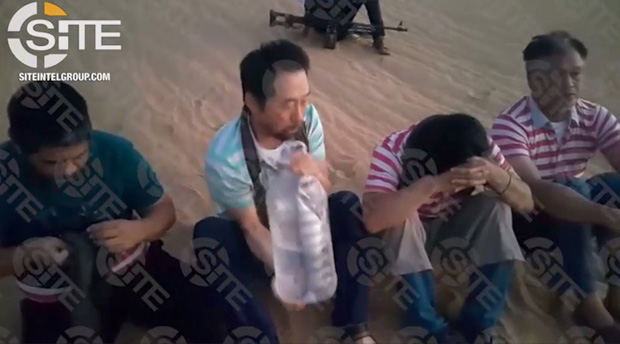 This screen grab image taken from video released and provided courtesy of the SITE Intelligence Group shows four hostages, one from South Korea and three from the Philippines, who are foreign employees of an engineering company in Tripoli, pictured sitting in the desert at an undisclosed location, according to SITE. — AFP photo

SEOUL: Seoul said yesterday it had deployed a warship to Libya in an apparent show of force to secure the release of a South Korean national kidnapped along with three Filipinos in the North African country.

The 4,000-tonne vessel, Munmu the Great, which takes part in anti-piracy operations in the Gulf of Aden, was now on its way to Libya, officials said.

In addition to “carrying out its duty of protecting commercial vessels, (the warship) is also preparing for all possibilities including the need for military support”, a defence ministry spokesman told AFP, without elaborating further.

The three Filipino engineers and a South Korean were abducted in an attack on a water project site in western Libya on July 6.

Their governments confirmed they were featured in a video shared on social media this week. The video, also posted by the SITE Intelligence group, shows the four men addressing the camera in English.

An armed guard is pictured squatting behind them in the sand, but their captors are not identified and the attack has not been claimed by any group. It was not clear when the video was shot.

“The Philippine embassy in Tripoli has confirmed that the three men in the video are the three Filipino technicians who (were) taken by armed men in Libya last month,” Philippine Department of Foreign Affairs spokesman Elmer Cato told AFP.

A spokesman for Seoul’s presidential office said the government was doing “its utmost with all the resources the country has”.

“His country and his president have never once forgotten him,” spokesman Kim Eui-kyeom said in a statement.

“The government has been maintaining a close cooperation system with the government of Libya and other allies, such as the Philippines and the United States, since the day of the incident for his safety and release,” Kim said.

Since former Libyan dictator Moamer Kadhafi was ousted from power and killed in 2011, foreign workers and diplomatic missions have frequently been targeted by militias or jihadists such as the Islamic State group. — AFP