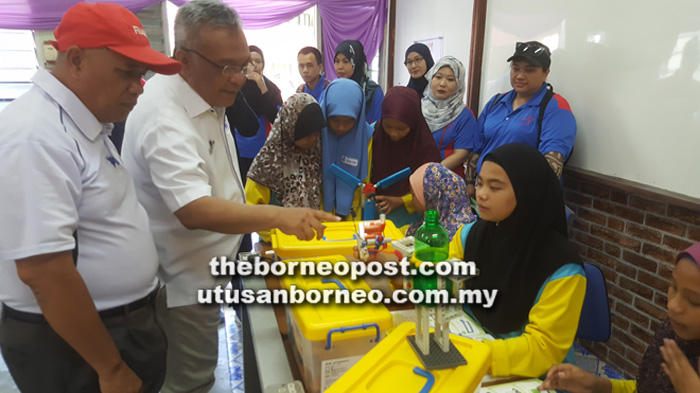 Kadim (second left) observes as students familiarise themselves with the STEM equipment while Awang Majri (left) and others look on.

learning tools and five computers to SK Bako which were received by its headmaster Awang Majri Awang Rosli on behalf of the school.

Kadim when speaking at the event said the STEM agenda is an initiative under the National Key Result Area (NKRA) for education.

“Under the initative, a STEM lab in schools is one of the focus in effort to further spur interest among students towards such subjects,” he said.

He lamented that the number of students taking STEM subjects in the nation is still low.

“This leads to a low number of specialists in those fields where only 20 per cent of students enrolled in STEM-related courses at the university level which is far from the government target of 60 per cent,” Kadim added.

He disclosed that Malaysia needs some 50,000 engineers in the future to become the catalyst towards modernising the nation and its industries and efforts towards achieving the objective must start immediately.

The STEM programme yesterday was an initative by Unimas under its ‘Jalinan Komuniti STEM Unimas’ to spur interest in STEM among the students.