Tuesday, June 15
You are at:Home»News»Nation»Wan Azizah will not relinquish position in Cabinet 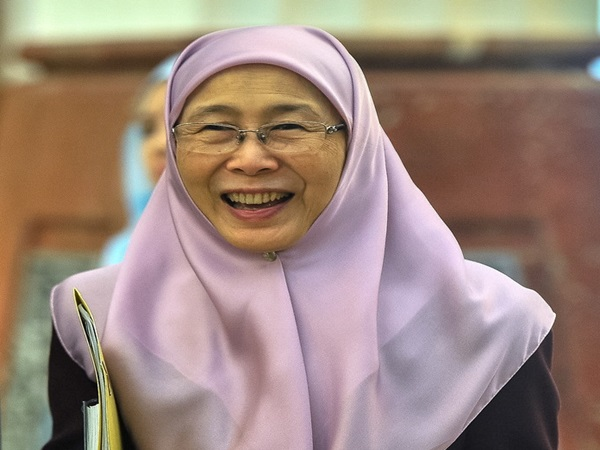 KUALA LUMPUR: Deputy Prime Minister Datuk Seri Dr Wan Azizah Wan Ismail said she will not relinquish her position in the Cabinet as well as the Member of Parliament for Pandan, to make way for her husband Datuk Seri Anwar Ibrahim.

She emphasised that she would retain all positions that she was holding although Anwar had won without contest the post of president of Parti Keadilan Rakyat (PKR).

“Certainly not (relinquish position). InsyaAllah (I will retain all posts including as the Member of Parliament for Pandan),” she said when met by reporters at the Parliament lobby today.

However, Dr Wan Azizah who is also PKR president, said the decision whether Anwar would contest a Parliamentary seat would be determined later.

Yesterday, Anwar unofficially won uncontested the position of PKR president after no nomination form was received from any other individual to challenge him at the 2018 PKR election.

Meanwhile,  Anwar’s eldest child Nurul Izzah also emphasised that she would continue to serve as the Member of Parliament (MP) for Permatang Pauh until the expiry of the current term.

“Permatang Pauh is my true love, so, I am pretty much committed. I have projects lined up,” she said.

“This proved that party members want to see that Datuk Seri Anwar is given an important role in leading the party as a major block in Pakatan Harapan and certainly, his leadership is most important for the benefit of component parties in PH,” he said.

When asked whether he was optimistic of retaining his position as deputy party president in the election, Mohamed Azmin said it was up to the party members.

Mohamed Azmin is being challenged by Rafizi Ramli who also submitted his nomination form for the post. – Bernama