Monday, June 14
You are at:Home»Business»Friendship no more: How Russian gas is a problem for Germany 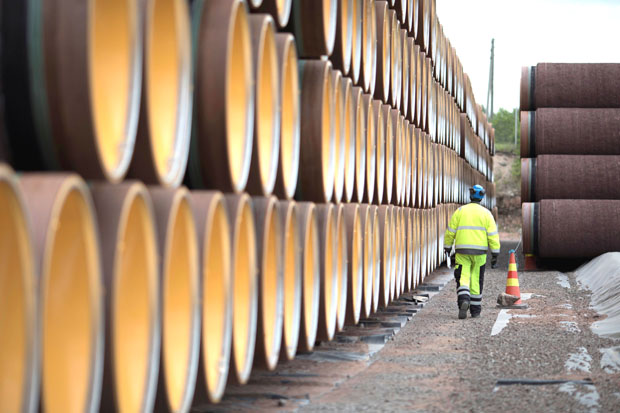 A man walks by a stack of North Stream 2 pipes in Kotka, Finland. Many analysts say the business case for Nord Stream 2 is thin. Another pipeline already links Russia and Germany under the Baltic. – Reuters photo

BERLIN: For decades, the Friendship pipeline has delivered oil from Russia to Europe, heating German homes even in the darkest days of the Cold War.

But a new pipeline that will carry gas direct from Russia under the Baltic Sea to Germany is doing rather less for friendship, driving a wedge between Germany and its allies and giving Chancellor Angela Merkel a headache.

For US President Donald Trump, Nord Stream 2 is a ‘horrific’ pipeline that will increase Germany’s dependence on Russian energy.

Ukraine, fighting Russian-backed separatists, fears the new pipeline will allow Moscow to cut it out of the lucrative and strategically crucial gas transit business.

It comes at an awkward time for Merkel. With the fraying of the transatlantic alliance and an assertive Russia and China, she has acknowledged that Germany must take more of a political leadership role in Europe.

“The global order is under pressure,” Merkel said last month. “That’s a challenge for us … Germany’s responsibility is growing; Germany has more work to do.”

In April she accepted for the first time that there were “political considerations” to Nord Stream 2, a project she had until then described as a commercial venture.

Most European countries want Germany to do more to project European influence and protect eastern neighbours that are nervous of Russian encroachment.

But letting Russia sell gas to Germany while avoiding Ukraine does the opposite, depriving Kiev of transit revenues and making it, Poland and the Baltic states more vulnerable to cuts in gas supplies.

“The price would be an even greater loss of trust from the Baltics, Poland and Ukraine,” said Roderich Kiesewetter, a Merkel ally on the parliamentary foreign affairs committee.

“We Germans always say that holding the West together is our ‘centre of gravity’, but the Russian approach has succeeded in dragging Germany, at least in terms of energy policy, out of this western solidarity.”

Many analysts say the business case for Nord Stream 2 is thin. Another pipeline already links Russia and Germany under the Baltic.

Nord Stream 2 will double capacity but future demand is uncertain.

On the flip side, German industry likes anything that will provide energy more cheaply.

Merkel’s Social Democrat coalition partners, the leading voices in Germany calling for a conciliatory approach towards Russia, are also in favour.

The issue has divided Berlin’s political class. The parties agreed in their coalition talks earlier this year to make a commitment to the pipeline, but did not put it in writing.

According to Margarita Assenova, an analyst at the Centre for European Policy Analysis who is critical of Nord Stream 2, Russia can double gas exports to Europe via existing Ukrainian pipelines without building the new conduit.

But despite opposition from European partners, from Washington and from within Merkel’s party, Nord Stream 2 continues. Germany’s diplomatic ambitions are being thwarted by the project’s brutal business logic.

On the other hand, it has the strong backing of Gazprom, Russia’s state-owned energy giant which owns Nord Stream 2 AG, the project company.

Its boss Matthias Warnig, once an East German spy tasked with reporting on West German business, is seen as one of Berlin’s most formidable lobbyists.

The pipeline is one of a network of Kremlin-sponsored projects seemingly designed to circumvent Ukraine, the largest and most troublesome of the countries once ruled from Moscow.
— Reuters