Tuesday, May 18
You are at:Home»News»Sabah»Papar Dam is different from scrapped Kaiduan Dam – Shafie 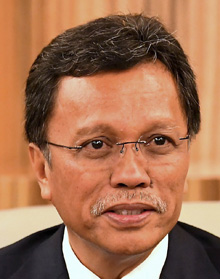 PENAMPANG: The Kaiduan Dam has been completely scrapped and not masked as the Papar Dam, said Chief Minister Datuk Seri Mohd Shafie Apdal.

“That is why we have decided that it will not be in that area, of course, it will partially be in the Papar area but it will be somewhere around … not the same place,” he said.

“I think within 10 years, five years like that, there will not be ample supply of water. So I think it is quite crucial for us to resolve it now.

We don’t want to wait. The current shortage is at 15%. If we don’t resolve that is not going to be good for everyone. Not only in Penampang, not only in Papar but also in the district somewhere in Kota Kinabalu.”

Shafie stressed that the RM2 billion Papar Dam will be located within the district of Papar and located at a totally different area than the previous RM2.3 billion Kaiduan Dam.
He said the Papar Dam would not be located at the area that had been identified in recent news reports.

He alleged that the Kaiduan Dam project had been renamed as Papar Dam and the new project would be located at a different place along the same river.

Mositun elaborated that the proposed new dam site was lower downriver and closer to Papar than the original site for the Kaiduan Dam and the area, located close to Kinarut, is more populated that the previous site.