Saturday, December 10
You are at:Home»Business»UniRazak triumphs as champions in Birla-AIM Competition 2018
For the freshest news, join The Borneo Post's Telegram Channel. 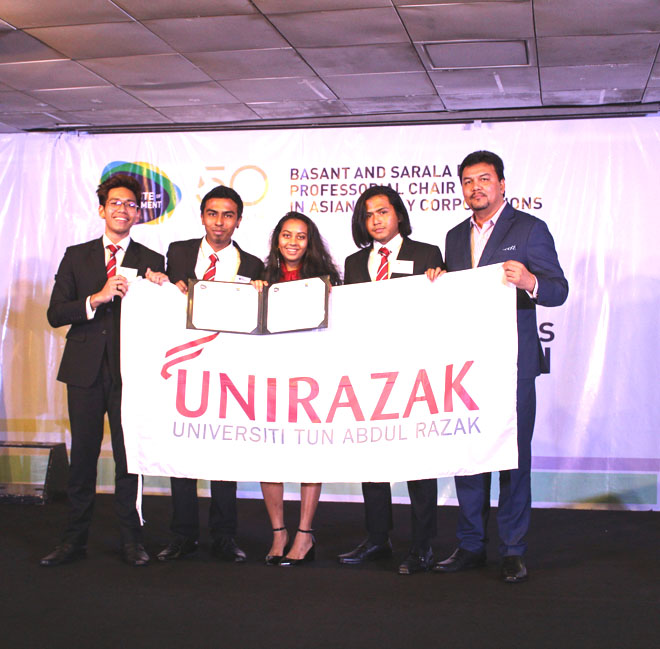 UniRazak consistently ranked top place in all three rounds, including the final round, beating teams from other Asian countries like Indonesia and the Philippines.

The competition, organised by the Basant and Sarala Birla Professorial Chair in Asia Family Corporations consisted of three rounds. For each round, the participants were assigned a case involving Family Businesses whereby they would have to analyze and present their solutions to a panel of judges.

UniRazak consistently ranked top place in all three rounds, including the final round, beating teams from other Asian countries like Indonesia and the Philippines.

Megat Firdauz Putra was awarded the ‘Overall Best Speaker’ while Jason Arvin won the ‘Runner-Up Best Speaker’ award. The team managed to take home a prize money of US$2,500 and a trophy. The winners were also granted a partial scholarship from AIM to do their Masters at AIM.

“This is a remarkable feat by our students who were judged by an international panel comprising of family business consultants and advisors, senior consultants of global firms like PwC and E&Y, and also managers of large family businesses,” said Mohar.

“A nice touch to this entire competition was also the fact that the UniRazak team were supported and sponsored by Johawaki Holdings Sdn Bhd, which is also a family-based business,” added Mohar.

Earlier this month, Johawaki Holdings represented by Abdul Hadi Datuk Abdul Rahim had agreed to sponsor the flights of the UniRazak team, mainly due to the nature of the Birla-AIM competition which focused on family business as a specialized area of research in the field of business studies.