Thursday, February 2
You are at:Home»News»Sarawak»Murder suspect brought to crime scene
For the freshest news, join The Borneo Post's Telegram Channel and The Borneo Post on Newswav. 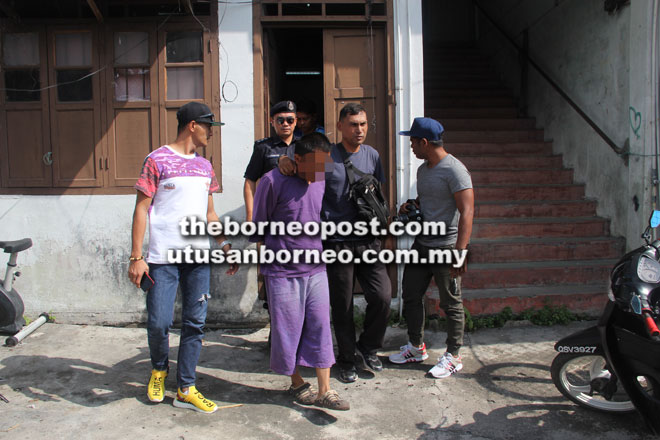 The suspect infront of the house where he allegedly committed the offence.

SIBU: The 42-year-old suspect in the murder of a female civil servant last week was brought to the crime scene about 9am yesterday by senior investigating officer ASP Sylvarius Gopog.

After that, he was brought back to the central police station here.

Another police team brought the suspect to a shop in Khoo Peng Loong Road about 10am to retrieve a gold jewellery he had allegedly stolen from the victim.

This was followed by a visit to a shop in Tuanku Osman Road where a handphone he allegedly stole from the victim was retrieved.

Later, the suspect was taken to a house in Ding Lik Kong Road where the police seized clothing which might be useful in their investigation.

The suspect was arrested at his wife’s longhouse in Julau on Tuesday, six days after the crime was committed.

He was said to have gulped down weedkiller before the arrest.

The police sent him to Sibu Hospital, and has since recovered.

He was ordered remanded for seven days on Wednesday.

Nurnia Azalea Priscilla Edward, 26, was found dead at her rented house in Tiong Hua Road last Thursday with her arms and legs tied.

A post-mortem established that she sustained severe injuries on her face, head and neck, as well as skull fractures and internal bleeding.

They also claimed that the suspect would loiter in front of the house before sneaking into the house when he thought nobody was looking.

Previous ArticleAzalina: Don’t be in a rush to abolish Anti-Fake News Act
Next Article Full MSPO certification by 2019