Sunday, January 29
You are at:Home»News»Sarawak»UCTS set up to help meet demand for highly skilled workforce in Sarawak
For the freshest news, join The Borneo Post's Telegram Channel and The Borneo Post on Newswav. 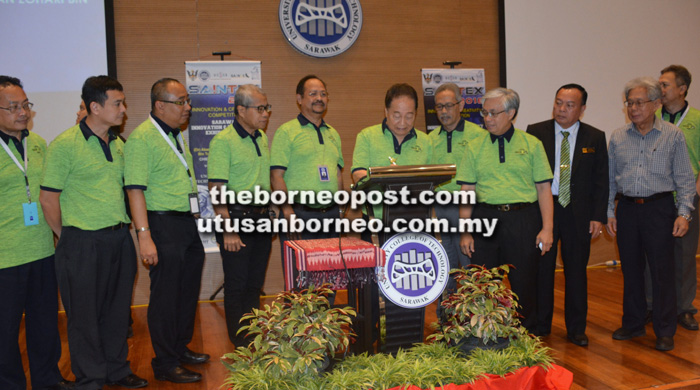 Wong (sixth right) officiating at Saintex’18 at UCTS campus while Khairuddin (fourth right) and others look on.

SIBU: State-owned University College of Technology Sarawak (UCTS) was set up to meet the demand of Sarawak’s industrialisation programme which needs some 500,000 technical workers in the next 12 years to become an industrialised state.

Abang Johari said this in his speech during the opening of UCTS’ inaugural Sarawak Innovation and Technology Exhibition 2018 (Saintex’18) here yesterday. The exhibition at UCTS campus is from Aug 9 till 11.

His text-of-speech was read by Minister of International Trade and E-Commerce and Second Finance Minister Dato Sri Wong Soon Koh.

The Chief Minister also mentioned that UCTS is a “home-grown” state university, initially developed to meet primarily the needs of professional and skill workers in the regional development – Sarawak Corridor of Renewable Energy (SCORE).

The Chief Minister added that for Sarawak to realise its Sarawak Digital Policy objective, TVET should also be given priority as an integrated part of the education system to nurture productive and competitive workforce, reduce dependency on foreign workers and elevate local workers’ competitiveness and earning power.

“For Sarawak, TVET is a critical agenda with two goals. First, is to provide the required skills through human capital development programmes or certification. Secondly to prepare and empower the people of Sarawak to face the challenges of transforming the state economy into a digital one.

“In the past, TVET was not given much emphasis compared to the mainstream education system which focused on academic field. For example, only eight per cent of secondary schools in Malaysia are involved in TVET, which is low compared to advanced countries like Germany and Switzerland, where almost 60 per cent are in TVET. In Singapore, 75 per cent of its secondary schools are in TVET.

“But this will change, especially with the current initiative taken by the new government to set up a TVET Empowerment Committee to boost the level and  standard of TVET in Malaysia,” he said.

He pointed out that in order to successfully embrace Industrial Revolution (IR) 4.0, there is a need to equip the young people with science, technology, engineering and mathematics (STEM) skills to develop advanced systems required for this highly digitised economy.

He cautioned that failure to keep abreast with IR 4.0 means that Sarawak will continue to be left behind.

“We have to stop confining ourselves working using old mentality and work culture as we need new ways to look at things. That is the main essence of STEM.”

Abang Johari assured that the government will play its part by ensuring that the digital infrastructure is fast enough and widespread to support the digital economy initiatives.

“The Sarawak Multimedia Authority (SMA) Ordinance has been enacted to provide the framework and environment conducive for a digital economy to thrive in the state. With all these initiatives, I am of the opinion that Sarawak is by far the most committed and focused state in the effort to be at the forefront of digitalisation,” he said. 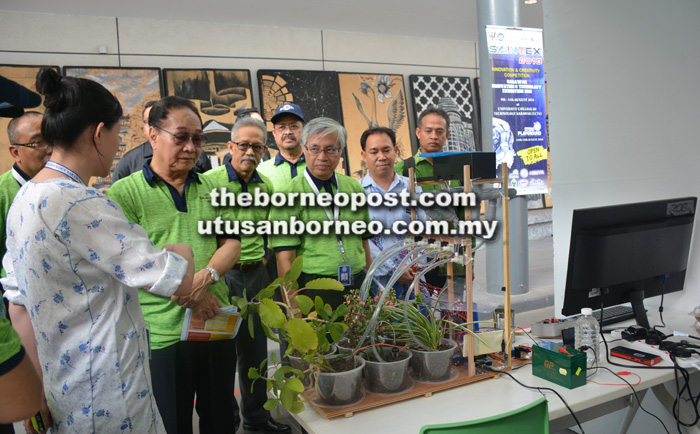 Wong (third left) listens to a briefing at a booth, while Khairuddin (third right) and others look on.