Thursday, September 23
You are at:Home»Business»BizHive»Eyes for a record high market performance 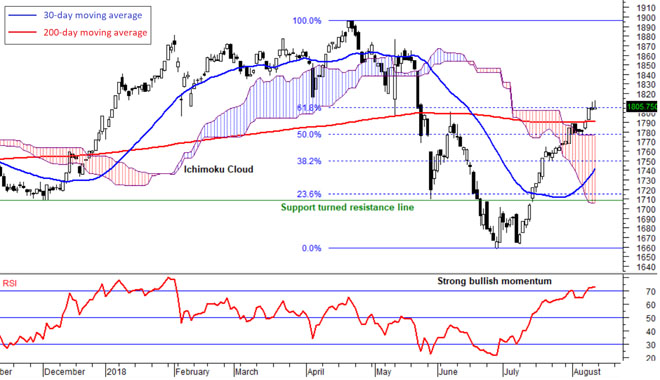 Global markets indices and commodities performances as at August 10:

The market continued to be bullish and the FBM KLCI rose for the fifth week. Furthermore, the benchmark index broke above the resistance level at 1,790 points.

The market was supported by foreign institutions and focus was on commodities-based stocks as prices of commodities rebound. The FBM KLCI increased 1.4 points to 1,805.75 points last Friday.

Asian markets (except Japan) were closed higher last week but European and US markets fell. Hong Kong’s Hang Seng Index take the lead in Asia, rising 2.5 per cent in a week but Japan’s Nikkei225 fell one per cent.

In Europe, Germany’s DAX fell for the second week.

The US dollar Index, which measures the US dollar against a basket of major currencies, rose to its highest in on year. The US dollar index closed at 96.3 points last Friday as compared to 95.2 points the week before.

However, the Malaysian ringgit was firm against the US dollar at RM4.08 and this means that the ringgit has strengthened against other major currencies.

Prices of gold and oil were directionless and ended marginally lower. Gold (COMEX) declined 0.2 per cent in a week to US$1,229.20 an ounce last Friday while crude oil (Brent) fell 0.6 per cent to US$72.96 a barrel.

The index is now testing the 61.8 per cent Fibonacci retracement level of the bearish trend that started in April at 1,806 points.

The FBM KLCI is also above a wide cloud and this indicates good support for the bullish trend. Furthermore, the Cloud has changed to a bullish direction.

In conclusion, the bullish momentum is still strong and this would be extended despite the index being overbought.

The index has a high chance of climbing higher towards the next resistance level between 1,880 and 1,900 points if it can stay above 1,790 points. Nevertheless, the index is technically bullish if it stays above the bullish trend support level at 1,760 points.

We may expect minor pull backs along the way as the market may take profits while rising.