Saturday, August 15
You are at:Home»News»Sabah»Act to regulate oil industry in Sabah 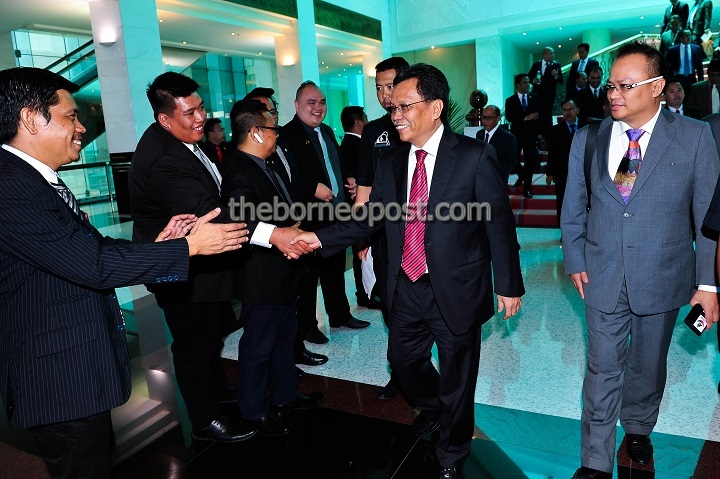 Seri Panglima Mohd Shafie Apdal shaking hands with well-wishers after the adjournment on the first day of the two-day assembly sitting on Monday.

KOTA KINABALU: Chief Minister Datuk Seri Mohd Shafie Apdal will announce an enactment on mineral resources that will allow the state government to regulate the oil industry over its land and water in the future.

Shafie said this at the State Assembly in response to another additional question posed by Datuk Dr Jeffrey Kitingan on whether the state government would emulate Sarawak and activate the mining and land ordinance laws to regulate the Sabah oil industry.

“Indeed, that is always in our thoughts. Soon I will have an enactment associated with minerals, but we are looking at two sectors. Whether it will be in the power over land, if it is in the field of land (it will cover) only mainland and where the offshore, you cannot do anything.

“But if it covers up the whole thing that is related to the ordinance of available mineral resources, I am confident that this will further empower the state government. I hope that YB Tambunan can provide support when I present this ordinance,” he quipped.

Shafie will also lead the pursuit of Sabah’s 40% oil net revenue owed by the federal government to the state as stated in the Malaysia Agreement 1963 (MA63) and Schedule 10, Article 112 of the Federal Constitution.

The Chief Minister reiterated this during the question and answer session in response to Jeffrey again.

“Regarding the 40%, I have already made an announcement and I will lead it myself. Even though there are officers from federal and junior officer dealing with me, I will stress it because this is a serious matter for us to realize at the Sabah state level because this 40%, we can partially acquire,” he said.

Shafie, who is also the Sabah Finance Minister, revealed that the state government had identified several other pursuits, such as deep sea fishing licensing matters but admitted that it would take time to accomplish due to financial constraints.

“There are many of these things that we can realize so the experts I have identified can examine in depth, but this cannot be realized in the short term,” he said.

“However, I am confident. We have the determination to do that with the support from all parties, the people. I’m confident that we can detail many things about the 40% per revenue. Not just in terms of deep sea fishing, (but also) tourism, labour levy,” added Shafie.