Tuesday, August 11
You are at:Home»News»Sarawak»‘Ladies’ Night’ spells danger for girls 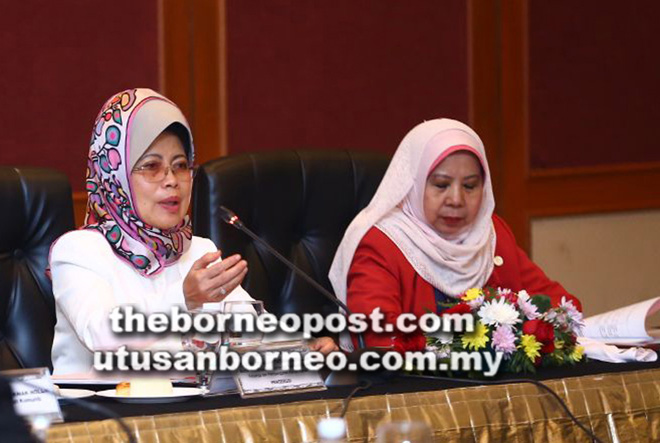 Fatimah (left) gestures as she speaks to reporters. Seen on her left is Rosey. — Photo by Muhammad Rais Sanusi

KUCHING: ‘Ladies’ Night’ a promotional event often held at bars where female customers receive alcoholic beverages for free or at a discounted price, is now a cause for concern in Sarawak as it has been identified as one of the risk factors for unplanned and unwanted teenage pregnancies.

This was revealed by Minister of Welfare, Community Well Being, Women, Family and Childhood Development Dato Sri Fatimah Abdullah who said the One-Stop Teenage Pregnancy Committee (OSTPC) had discovered an apparent trend among teenagers who frequented ‘ladies’ night’.

“I have just been informed about this by the committee that teenagers would frequent ‘ladies’ night’, usually held on Wednesday and Saturday, where ladies get to have (alcoholic) drinks on the house.

“I’m told that this event is not confined to just Kuching but has even spread to rural areas. It becomes a draw for teenagers after being notified of the latest ‘ladies’ night’ event through social media,” she told a press conference after chairing an OSTPC meeting at a leading hotel here yesterday.

Fatimah urged parents to be aware of their teenage daughters’ whereabouts and activities.

“This is because if there are underage teenagers involved, they are at high risk because ‘ladies’ night’ involves drinking, and drinking and bad decisions go hand-in-hand.

“Also, other unwanted situation such as their teenage daughters drinking spiked drinks might also occur,” she said.

Earlier, Fatimah said a total of 973 teenage pregnancies have been recorded in Sarawak from January to July this year, lower than the number in the corresponding period last year at 1,135 cases.

She also said that out of the 973 cases, 879 cases involved those who did not go to school or have dropped out of school.

On another matter, Fatimah said the Health Department would be introducing the ‘Klinik Ikon Mesra Remaja’ in Sarawak as a pilot project to provide health services to teenagers.

She said two of such clinics would be set up at the existing government health clinics in Bintulu and Kapit to enable teenagers to come for consultation regarding their health or even talk to counselors if they are suffering from stress, anxiety or depression.

“The clinic, which will consist of a counselor, doctor and nutritionist, among others, will be an avenue for the teenagers to talk to someone about the problems they face.

“Training has been carried out with the frontliners, and we hope that the clinics can start operating by the end of the year,” she said.