Saturday, February 29
You are at:Home»News»Sarawak»Man arrested for drug and gun-related offences 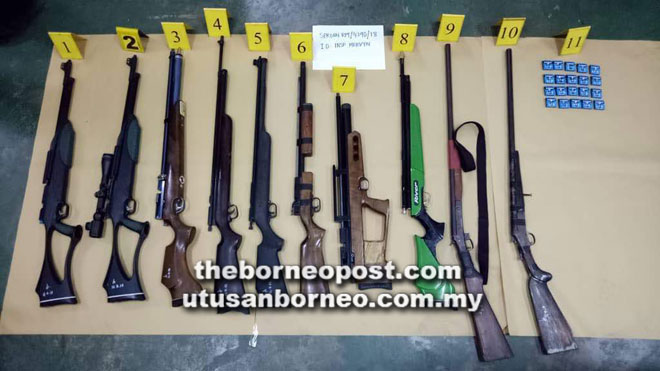 The home-made shotguns, eight air rifles and 20 boxes of pellets seized from the suspect’s house.

SERIAN: Police have arrested a man for drug and gun-related offences.

District police chief DSP Aswandy Anis said acting on public tip-off, narcotics police searched a man for suspected involvement in drug abuse within the district headquarters compound at around 10.40am on Thursday.

“The search yielded a translucent package containing crystal substance believe to be Methamphetamine weighing 0.84 grammes, which led to the arrest of the 21-year-old suspect,” he said in a statement yesterday.

Aswandy added the package was found in the suspect’s black pouch.

Following the arrest, the raiding team then searched the suspect’s house at Taman Anggerik Indah here, where police seized two home-made shotguns, eight air rifles and 20 boxes of pellets stored in a room.

The suspect was brought to the district headquarters and has been remanded for four days to facilitate investigation.