Saturday, September 26
You are at:Home»News»Nation»Public need not worry over air defence assets — RMAF 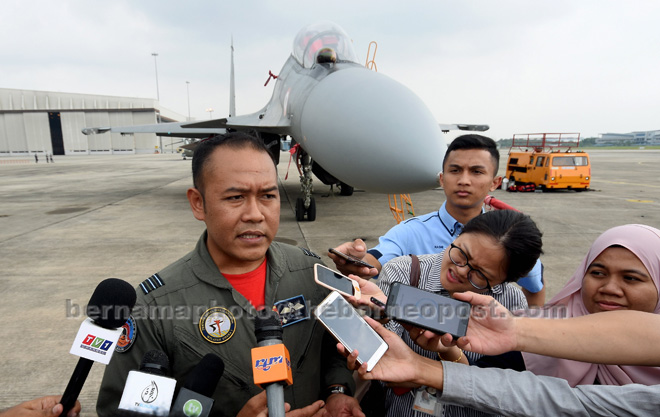 Faisal during an interview session with the media in Subang yesterday. — Bernama photo

“In general, our air force is strong and the assets are in good condition. So the general public do not have to fear or think that we have inadequate military assets or that the RMAF is weak,” he told Bernama when met after the EX HOP exercise between the RMAF and the Indian Air Force (IAF) here yesterday.

He added that the RMAF assets and operating system could be safeguarded more effectively with additional budget from the government.

“Some of the military assets are already 10 years old and they need to be well-maintained to last longer. So an extra budget from the government would be good.” He said this when asked to comment on the capabilities of the RMAF assets, including fighter jets which had been poorly maintained due to lack of provisions.

Meanwhile, the EX HOP field training being held from Aug 20 to 23, witnessed two pilots from the 11th Squadron flying the Sukhoi SU-30MKM aircraft at the Subang Air Base yesterday.

At the same time, an RMAF pilot also flew with an IAF pilot on their SU-30MKI aircraft.

Earlier, Lt Col Faisal Abu Bakar told reporters that through the exercise the RMAF could identify the strengths and weaknesses of the existing aircraft in order to improve for the future.

“We take note of important information through feedback from IAF when their pilots take on our Sukhoi aircraft and vice versa.

“The EX HOP is a follow up to the recent Pitch Black exercise. We  find that our aircraft capabilities are similar to the IAF’s but we are better off in terms of avionics (the electronic system in the aircraft) and this is something positive,” he said. — Bernama