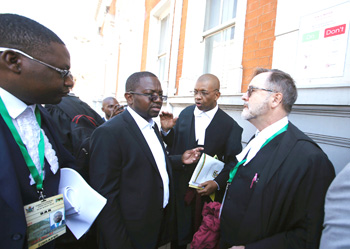 HARARE: Zimbabwe’s Constitutional Court yesterday began to hear an opposition petition seeking to overturn the presidential election result, in a legal challenge seen as unlikely to succeed despite allegations of vote fraud.

The Movement for Democratic Change (MDC) has accused the ruling ZANU-PF party and the election commission of rigging the July 30 vote, Zimbabwe’s first poll since the ousting of Robert Mugabe last year.

Chief Justice Luke Malaba opened the televised proceedings in Harare, where the court premises was surrounded by high security.

Mugabe’s successor, Emmerson Mnangagwa, won the election with 50.8 per cent of the vote – just enough to avoid a run-off against the MDC’s Nelson Chamisa, who scored 44.3 per cent.

“It’s D-Day for us. Our team is ready. We have got all the evidence to prove in court that our position is correct – our party won the elections,” MDC national chairman Morgan Komichi told reporters outside the courtroom.

Mnangagwa, who has vowed to turn around Zimbabwe’s ruined economy, had hoped the elections would draw a line under Mugabe’s repressive 37-year rule.

Campaigning was more open than previous votes, but the election was marred by the army opening fire on protesters, killing six, allegations of vote-rigging and a crackdown on opposition activists.

“I won the court case before it began,” Mnangagwa said on the sidelines of a regional summit in Namibia at the weekend. “It’s declared free and fair … why would I ever think that I will lose?”

“To those who voted for Chamisa, I ask you to gracefully accept defeat so that the country can move on.”

The MDC has said it was denied victory by “mammoth theft and fraud”, citing a catalogue of irregularities and discrepancies including incorrect counting and at some polling stations more ballots were counted than there were registered voters. — AFP