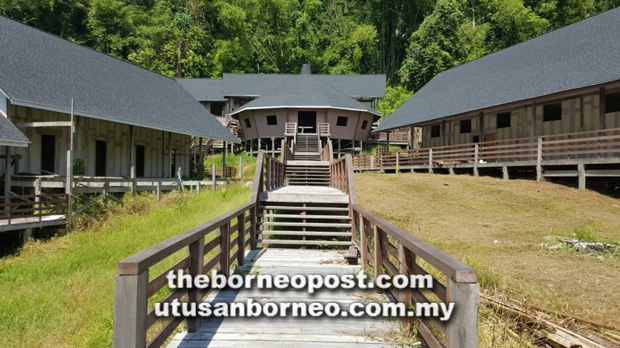 Minos hopes that the BBHC could open its doors to visitors by Jan 1 next year.

According to Bung Bratak Heritage Association (BBHA) president Dato Peter Minos, the Bung Bratak – referring to the summit of the Bratak Mountain in Bau – has been cited by historians and Bidayuh elders as the original ancestral home of the Jagoi-Bratak sub-group of the Bidayuhs.

“That is why Bung Bratak is highly regarded for its historical value and as a sentimental place for the Jagoi-Bratak folk. The BBHC is built in honour of the ancient Bidayuh settlement history and heritage,” he said yesterday.

Minos also said the progress of works on the BBHC – initiated and developed by the BBHA – is over 90 per cent; it is learnt that the Public Works Department (JKR) is now constructing the mountain road, as well as the fittings and furnishings around the area.

Minos expressed his hope for the centre to open its doors to visitors by Jan 1 next year.

He said during its triennial general meeting on Sunday, the BBHA had agreed to invite Chief Minister Datuk Patinggi Abang Johari Tun Openg to officiate at the official opening ceremony slated for early next year.

“The BBHC has two traditional longhouses – one to house a seminar/conference hall, an office and the mini museum, while the other is for homestay/retreat that can accommodate up to 100 people. There is a Bidayuh traditional roundhouse or ‘baruk’ for small meetings and functions, a dining hall, kitchen and reception hall,” he said.

He also said there would be entry fees for the visitors and tourists coming to BBHC, but assured all that the rates would be ‘most affordable’.

On behalf of BBHA, Minos conveyed his appreciation to various government agencies and individuals for establishing the BBHC, especially the federal and Sarawak authorities in tourism, JKR Sarawak, Land and Survey Department, Bau District Council, Bau District Office, Sarawak Tourism Board and the local elected representatives.

“Bung Bratak is truly a project by those who have deep and special love and respect for history, culture and eco-tourism, and I am truly grateful to them all,” he said.

The BBHC had its soft launching on April 1 this year. The project is fully financed by the federal Ministry of Tourism at a cost of RM8 million, while the construction comes under the purview of JKR Sarawak through an appointed contractor. File photo shows workers putting the finishing touches on a section of the centre.