Wednesday, February 8
You are at:Home»News»Sarawak»University of Southampton Malaysia graduates top their class
For the freshest news, join The Borneo Post's Telegram Channel and The Borneo Post on Newswav. 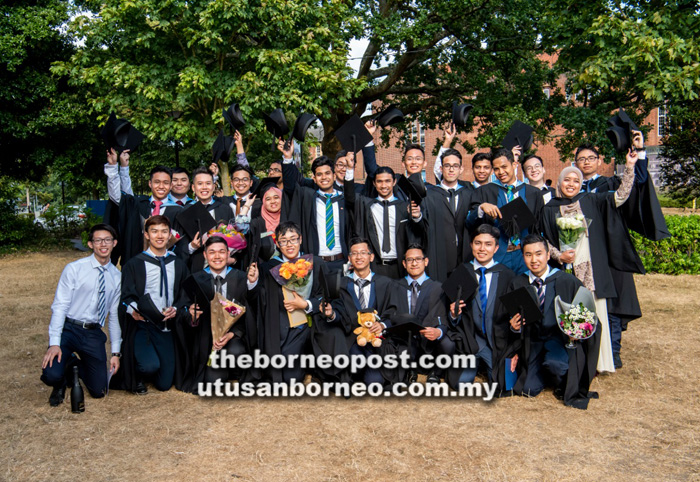 The graduates pose for a photo after the ceremony.

KUCHING: University of Southampton Malaysia (UoSM) graduates did well this year and were placed amongst the top 10 within their graduating class. As a further mark of their success, many of this year’s graduating class are already heading to highly competitive roles with major employers including Dyson, Intel and Deloitte.

Within mechanical engineering, 12 of the graduates benefitted from scholarships offered through Majils Amanah Rakyat (Mara).

Amongst the Mara-sponsored students to graduate this year, two achieved first-class honours and nine others obtained a 2:1, an achievement that demonstrates the outstanding quality of the scholarship students.

He believes that Mara is a great sponsor that plays an important role in supporting students.

“I’m really happy because of my results – I managed to get what I wanted. At the same time, I’ve made a lot of friends and I have good relationships with my supervisors and lecturers,” he said.

Aaron Yii How Teo, who also achieved first-class honours with his Master of Engineering degree in Mechanical Engineering with Aerospace, won the Dean’s Award for being the top scorer in Part Four of his degree programme.

“There are so many opportunities; the lecturers are so supportive and the people around you help you if you are down.

“It’s just that sort of positivity that reflects the life of a student at the University of Southampton and I think it’s an excellent way to move forward,” he enthused.

The university is also celebrating the achievement of Siti Hartini Hamdan, UoSM’s first ‘homegrown’ Malaysian PhD recipient who was awarded her doctorate after completing her thesis ‘Multi-Scaled Friction Modelling of Lubricant Surface Interactions in Tribological Contacts’.

She was also supported by Mara during the three years of her PhD and says that one of the highlights of the programme was the opportunity to experience two working environments, in Malaysia and the UK, as part of her studies.

“This is another milestone for UoSM – one that shows the university’s ambitions to cultivate world-class, cutting-edge research and in line with our commitment to being a research-led university,’’ said co-supervisor and assistant professor Dr Jo-Han Ng.

Similarly, UoSM chief executive officer Prof Rebecca Taylor commented: “We’re extremely proud of all our graduates as well as our continuing students and new starters due this autumn.

“We have every confidence that this year’s graduates will continue to thrive as they enter the world of work, taking with them the skills and all-important support network offered through UoSM staff and alumni from previous years.”