Thursday, October 6
You are at:Home»News»Sabah»Hard work pays off for Petronas education sponsorship recipient 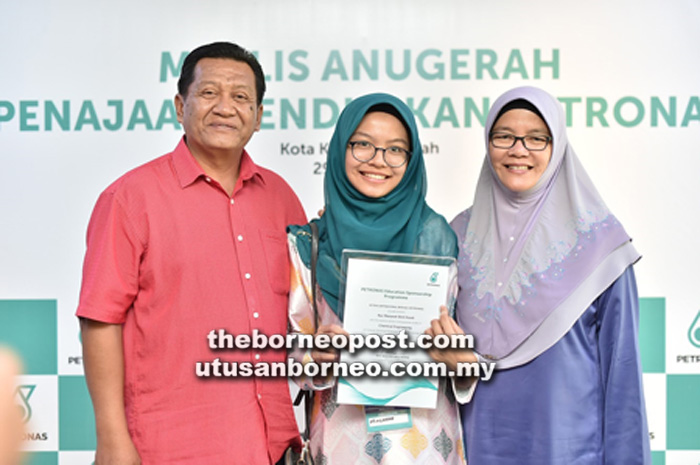 Nur Maisarah with her parents during the Petronas education sponsorship award ceremony in Kota Kinabalu recently.

KOTA KINABALU: Nur Maisarah Kusdi, 18, a former SMK Tamparuli student, has always wanted to be an engineer — chemical engineer to be exact and has worked hard to achieve her dream.

“I love Chemistry and Physics. When I was offered the Petronas Education Sponsorship Programme (PESP) to pursue Chemical Engineering at Universiti Teknologi PETRONAS (UTP), I accepted it whole-heartedly although at that time I also had an offer from another institution,” she said.

Nur Maisarah who is currently undergoing a foundation course at UTP prior to pursuing a Degree in Chemical Engineering, said her early exposure to Petronas’ programmes , such as Petrosains Science Show Competition, during her school days, inspired her to pursue sponsorship from the company.

“We had so much fun and learned a lot participating in the Petrosains Science Show Competition.

“We carried out experiments and recorded them on videos for evaluation. The manner in which the competition was conducted helped me to understand the subject matter better,” said Nur Maisarah, the youngest of four siblings.

Performing well in Sijil Pelajaran Malaysia (SPM) played a huge part in her securing the scholarship through PESP but that was only one part of the whole story in her journey to become a Petronas scholar.

The other part was the meticulous preparation she had embarked on ahead of a special assessment session called ‘Petronas YoungStars Day’ in Kota Kinabalu last April, to select the final list of PESP recipients from Sabah.

The session includes a two-phase test and a group presentation, followed by an interview.

Nur Maisarah’s mother, Rohani Abdullah said it was not easy to shine among the shortlisted candidates but added that she has faith in her daughter’s ability because Nur Maisarah had worked so hard to prepare for it.

“She prepared well for the session by researching all she could about Petronas and the career opportunities available in the oil and gas industry.

“She also read and followed the blogs of previous PESP recipients. Of course, we are extremely happy that she made it through,” said Rohani, a principal of SMK Sri Nangka in Tuaran.

Nur Maisarah’s father Kusdi Ribut said: “I was in office when my daughter broke the news in our family group chat.

“I was overjoyed. We’ve been waiting for such an opportunity to come along. I’m also proud that SMK Tamparuli has yet again produced another Petronas scholar. Previously, two students from the school were offered the PESP,” said Kusdi, a former SMK Tamparuli principal.

The school is among several Sabah schools which have been actively taking part in Petronas programmes.

“I would say the school’s participation in Petronas programmes helped motivate the students to compete and do their best.

“I believe my daughter’s participation in these programmes helped build her character and prepared her well for the assessment,” said Kusdi who is now the Kota Kinabalu Form Six College principal.

A total of 34 Sabahan students received their education sponsorship from Petronas this year.

Nur Maisarah is one of many Sabahans who benefitted from the PESP.

Since 2003 alone, Petronas has sponsored a total of 452 Sabahans under the programme to pursue tertiary studies in petroleum engineering, mechanical engineering, geophysics, finance, law, and other industry-related courses at a number of universities overseas as well as at UTP.