Thursday, February 2
You are at:Home»Business»Australia’s economy powers on as exports rise
For the freshest news, join The Borneo Post's Telegram Channel and The Borneo Post on Newswav. 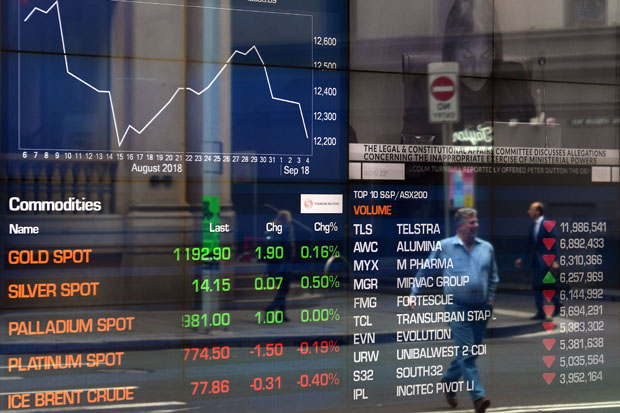 A pedestrian is reflected in a window of the Australian Securities Exchange (ASX) in Sydney on September 5. Australia’s buoyant economy posted strong growth in the second quarter of the year on the back of increasing exports, consumer and government spending, official data showed. — AFP photo

SYDNEY: Australia’s buoyant economy posted strong growth in the second quarter of the year on the back of increasing exports, consumer and government spending, official data showed yesterday.

The economy expanded by 0.9 per cent in the March-June quarter, following 0.7 per cent growth in the first three months of the year, to take the annual rate of growth to 3.4 per cent – the fastest pace since September 2012.

The quarterly reading was far above market expectations of 2.8 per cent, and comes after the previous quarter’s year-on-year reading of 3.1 per cent.

The increase sent the Australian dollar jumping almost half a cent to 72.17 US cents.

“The national accounts for the June quarter highlight the strength and the resilience of the Australian economy, which is in its 27th year of consecutive economic growth,” Treasurer Josh Frydenberg told reporters.

“The economy is strong, the fundamentals are good and momentum has continued and these are an encouraging set of numbers.”

The economy has recorded uneven expansion in recent years as an unprecedented period of mining investment reaches its end, with the Reserve Bank of Australia cutting interest rates to a record-low of 1.5 per cent to support growth.

Household spending jumped 0.7 per cent during the quarter to contribute 0.4 per centage points to growth, while net exports added 0.1 per cent.

Government expenditure rose 1.0 per cent in the period to continue its stellar growth through the year.

The savings ratio, which measures how much households save in proportion to their disposable income, was at 1.0 per cent for the quarter, the lowest since December 2007.

It had soared to almost 10 per cent in 2012 after the global financial crisis.

The stronger data reinforced expectations that the next move of the Reserve Bank would be to lift rather than cut interest rates.

But analysts said any hike was not likely in the near-term, with wages growth and inflation remaining soft.

“Despite solid growth, the economy is not generating much in the way of wage or price pressures,” Commonwealth Bank of Australia senior economist Gareth Aird said in a note.

“There is still plenty of slack in the labour market to chew through.”

St John cautioned that exports growth was expected to level out in the second half of the year, while the low savings ratio meant consumers would be unable to further draw down on their reserves.

House prices – particularly in the larger cities like Sydney and Melbourne – were also falling this year as tighter lending standards discourage local and international investors, while turbulence in the global economy was a downside risk.

“As the RBA had been expecting growth to be strong, these data don’t mean a rate hike is around the corner,” Capital Economics’ chief economist for Australia and New Zealand Paul Dales said.

“But the markets may start to reconsider their view that rates won’t rise until sometime in 2020.”