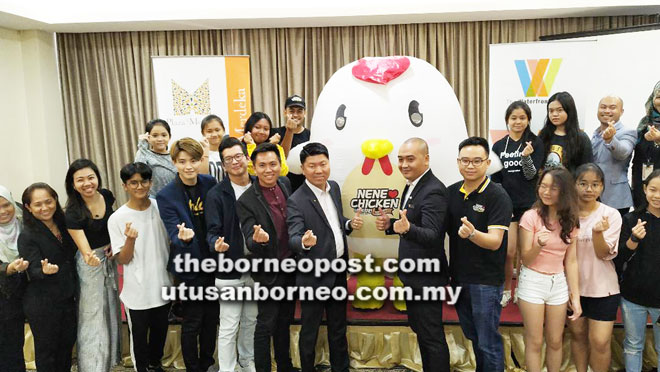 KUCHING: Plaza Merdeka shopping mall is holding its first K-Pop dance competition together with one of its newest tenants, Nene Chicken.

The competition will take place on Sept 9 at 2pm and is organised to commemorate Nene Chicken’s grand opening.

“We have 20 teams battling it out to win the top three spots. First place takes home RM1,500, while second and third place takes home RM1,000 and RM800 respectively. There’s also a prize of RM500 each for Popularity Award and Best Costume. The champion gets to perform during the grand opening of Nene Chicken on Sept 10,” said Plaza Merdeka general manager Cheah Kheng Mun at a press conference here yesterday.

Each team has a minimum of three members, and the youngest participant is eight years old, he added.

“Shoppers who spend a minimum of RM30 in a single receipt mall-wide will be entitled to vote for the Popularity and Best Costume awards, from 2pm onwards on the competition day.

“Aside from that, shoppers dressed in Korean costume on that day stand to win a cash voucher of RM500.”

The winners will be selected by a line-up of experienced judges based on K-Pop identity, dance cover, synchronisation, costume, creativity and popularity.

In addition, Plaza Merdeka is also holding a K-Fair on Sept 6-9 comprising a mini Korean food fair featuring famous Korean food such as tteokbokki, kimbap, kimchi, dosirak and many more.

Shoppers will also get a chance to experience the Korean atmosphere with Korean Hanbok at the photobooth for the K-Fair, while children will also have fun taking photos with the Nene mascot.