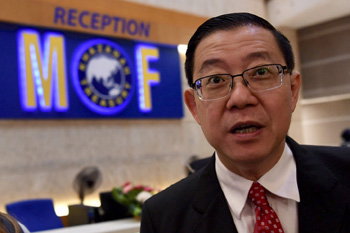 PUTRAJAYA: Seventy-five per cent of shops and restaurants that came under the Goods and Services Tax (GST) are not subject to the Sales and Service Tax (SST) after the SST threshold was raised to RM1.5 million as compared to RM500,000 under the GST, said Finance Minister Lim Guan Eng.

He said the SST threshold was three times higher than the GST previously charged to consumers from restaurants which had an annual turnover of over RM500,000.

Following this, he said there were only 4,372 restaurants registering their business under  the SST regime as  compared to 17,574 restaurants under the GST.

“Is not the SST impact much less than GST when only 25 per cent of restaurants and coffee shops are affected by the SST compared to GST ?” he said in a statement here yesterday.

Lim in the statement also blamed former Prime Minister and former Finance Minister Datuk Seri Najib Tun Razak for allegedly ignoring the fact that the six per cent service tax imposed under SST was the same as the GST.

Najib in his Facebook posting had expressed dissatisfaction after the kuih pau or steamed buns which he bought in Tanjong Malim was charged SST and he uploaded a picture of the receipt which showed the SST amount of RM3.80.

Lim also said the Finance Ministry would meet the Real Estate and Housing Developers Association (Rehda) Malaysia, to discuss the possibility of following the initiative by its Penang chapter (Penang Redha) to reduce house prices.

The move would see discounts of 10 percent for houses costing RM300,000 and above, and six percent for affordable houses below RM300,000.

He said the government also granted SST exemptions on building materials and services which was different from GST.

“The Federal Government welcomes any decision from  developers to lower house prices in tandem with the SST exemption.

I will meet with Rehda Malaysia to discuss whether the same steps taken by Penang Redha can be applied throughout the country,” he said. — Bernama