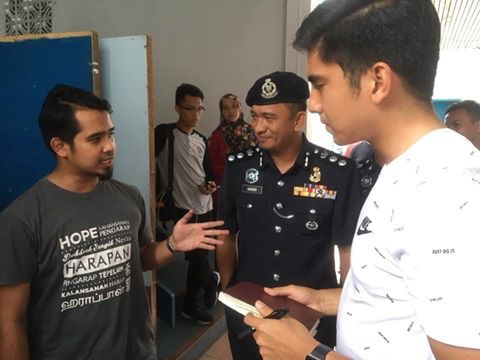 Saddiq (right) speaking to Mohd Khairuddin Daud, one of the apprehended activists at the Karamunsing police station.

Bersih 2.0 Vice Chairperson (Sabah), Beverly Joeman said politicians and political party leaders were not asked to speak for activists when they were apprehended by police during an assembly dubbed ‘Pandang ke Sabah,’ this morning.

“The politicians and political party leaders showed up on their own will and initiative to find out what transpired this morning. For this, there is a glimmer of hope that change just might happen in the New Malaysia,” said Beverly.

She was speaking of Federal Youth and Sports Minister Syed Saddiq Syed Abdul Rahman, who went down to the Karamunsing police station to visit the eight arrested activists.

Saddiq affirmed his stance as a believer in freedom of expression and assembly, so long as it is done peacefully. He urged that new and different ideas be celebrated, especially in wake of the new administration.

“They are entitled to their freedom of speech,” he said of the activists, who gathered to demand, among other things, equal education rights, better public transport service and job opportunities for Sabahans.

In a statement after the arrest, Bersih 2.0 (Sabah) Coordinator Asraf Sharafi said the police should not use the Peaceful Assembly Act to stop any gathering to respect Article 10 of the Malaysia Constitution.