Saturday, August 15
You are at:Home»News»Sarawak»Urda to implement over RM1.4 billion in devt projects over next two years — Masing 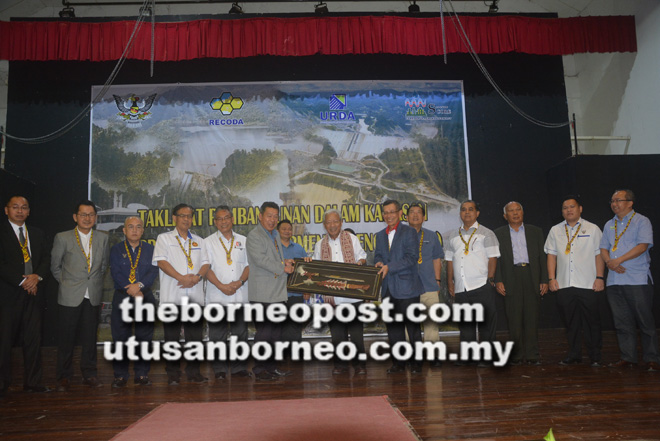 Masing (centre) receives a memento from Ismawi (on his left) and Kapit Resident Joseph Belayong, witnessed by (from third right) Blikau, Aaron and Ugak, Jamit (fourth left), Nyabong, (fifth left) and others.

KAPIT: The Sarawak government has approved over RM1.4 billion worth of development projects for areas under the Upper Rajang Development Agency (Urda), to be implemented over the next two years.

Deputy Chief Minister Tan Sri Datuk Amar Dr James Masing who disclosed this said the projects would go towards improving infrastructure and amenities such as roads, water and electricity, in Kanowit as well as Song, Kapit, Bukit Mabong and Belaga.

He explained that Chief Minister Datuk Patinggi Abang Johari Tun Openg approved the funds based on the submissions and findings of the Urda Special Lab held in February this year.

“The results of the special lab was compiled and submitted to the chief minister. He was very pleased and approved RM1.472 billion to implement the projects.

“All of these projects must take off over the next two years, so Urda has to act fast (to implement). This has to be done quickly, by 2019 and 2020,” he said when officiating at a briefing with community leaders from Kanowit and Kapit, at the civic centre here yesterday.

The purpose of the briefing was to enlighten grassroots leaders on the role and function of Urda as well as various approved projects, for them to disseminate the information to their respective charges.

“The problem is that not all the ‘rakyat’ (people) know what Urda has done. That is why we are having this briefing today (yesterday) so that the community leaders can know about the development projects being planned and how much is being spent.

“It is a lot of money and the people need to know what the Sarawak government is doing for them,” he said, adding that by informing the people of upcoming projects, it will enable the implementation to be carried out smoothly and ensure faster completion.

Masing, who is also Urda chairman, said apart from the RM1.4 billion worth of Urda projects, there are also other government projects worth RM4 billion, including under the Rural Transformation Programme (RTP), set to be implemented in the said areas.