Saturday, August 15
You are at:Home»News»Sabah»New communication system to address fish bombing at park 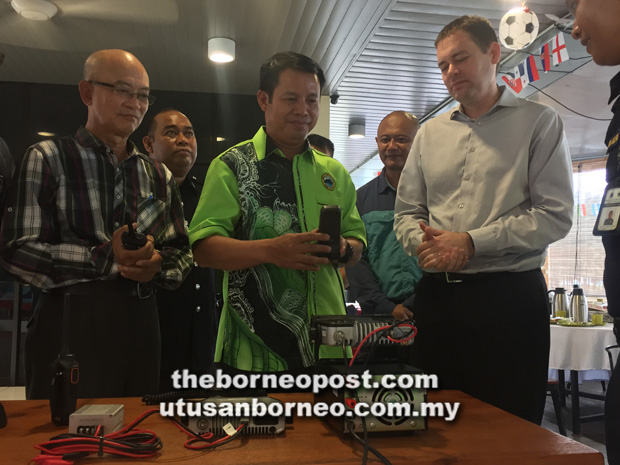 Roger (left) briefing Jamili (centre) on how to operate the new communication system as Bradley (right) and Fazrullah (second right) look on.

KUDAT: The completion of the new communication system for Tun Mustapha Park will help curb potential threats such as fish bombing and encroachment at the treasured park.

Yesterday, a special ceremony was held at the Kudat Marina Jetty to mark the completion of the Communication  Equipment System (VHF Radio Tower) Project and Development of Communication System for the operation of Tun Mustapha Park.

“We are able to communicate now. If there is fish bombing (detected), we can report it straight away. Not only that, we are also going to equip our honorary park rangers.

“We currently have 30 of them from communities on the islands. If they have something to report, it will be easier (for them) now because of the communication system. We are going to equip all of them,” Jamili said.

The installation of the VHF Marine Radio Network system for the park was fully funded by the U.S. Department of State, and was constructed by Syarikat Arah Mekar Sdn Bhd, the contractor for the project.

Other than fish bombing, the new communication system will also address other potential threats such as cyanide fishing and encroachment.

“There are a lot of issues that are being faced by Tun Mustapha Park. Beside fish bombing, cyanide fishing is one of the other destructive fishing methods that is (currently) being used here,” World Wildlife Fund (WWF) Malaysia Head of Marine Dr Robecca Jumin disclosed.

“There are also issues of encroachment. We have zones within the park; commercial fishing are not allowed to be conducted in certain zones like the protected areas as well as the community zones,” she added.

She reiterated that the communication system would help the fishermen, community members and honorary park rangers to communicate with each other to detect these threats.

She also expressed hope that the communication system will curb turtle poaching, despite the fact that there were no recorded cases at Tun Mustapha Park for the past few months.

The six-meter tall VHF tower was built at a strategic location 520 meters above sea level, giving it a range of 80km and covering at least 90 per cent of the park

When asked whether the aforementioned problems were serious, Robecca opined that these issues such as fish bombing were “quite serious”.

“I think  it is quite serious and that we need to address it. As you know, fish bombing is an issue. We understand that there has been a decline in recent years, but it is still happening,” she said, adding that the decline might be due to the lack of fishes in certain areas.

Meanwhile the Counsellor of Public Affairs of the US Embassy Bradley Hurst echoed Jamili’s joy as the two-year programme has finally concluded.

In 2016, the U.S. Department of State hosted a global conference in Washington DC called Our Ocean, which focused on several key ocean issues – marine protected areas, sustainable fisheries, marine pollution, and climate-related impacts on the ocean.

Following that event, the US Embassy in Kuala Lumpur set aside USD250,000 to support a project on establishing and reinforcing marine protected areas in Malaysian waters, specifically in Tun Mustapha Park.

To proceed with this, several discussions were conducted which eventually agreed that a VHF Marine Radio Network system will be developed for the park. As mentioned, it was also agreed that the program will provide surveillance and safety equipment for  park rangers, including those appointed as honorary park rangers.

“Once a plan was in place, the next step was to implement it. At this point, Sabah Parks, WWF and Arah Mekar Sdn bhd were crucial. WWF’s efforts were truly impressive, reaching more than 80 communities to ensure they fully understood the TMP Management Plan and involve them in TMP co-management efforts.

“In addition to that, we have also supported WWF in some of the community outreach; given the large population that lives within the park’s boundaries and the importance of that population’s understanding the protection and becoming part of the solution and engagement,” Bradley added.

Established in 2016, Tun Mustapha Park is an International Union for Conservation of Nature Category VI Park protected area, with sustainable use provisions that allow communities to continue their activities within designated zones.