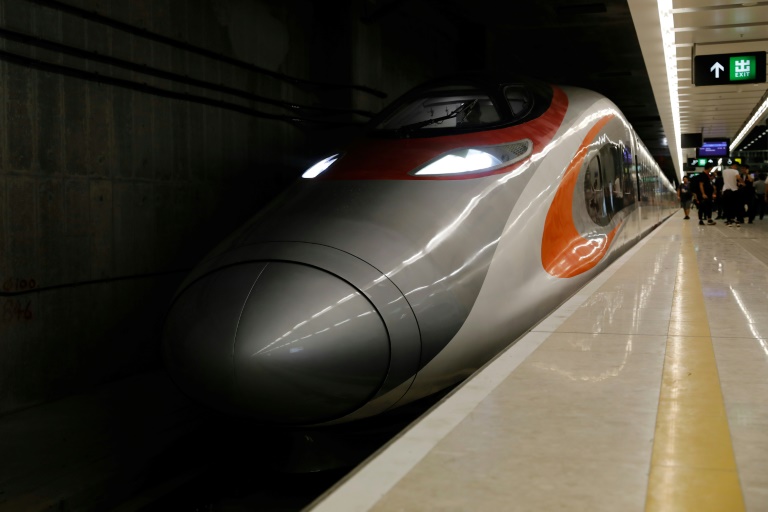 The new high-speed rail link is expected to cut the journey time between Hong Kong and Beijing to nine hours. – AFP photo

A new high-speed rail link between Hong Kong and mainland China launched Sunday, a multi-billion-dollar project that critics say gives away part of the city’s territory to an increasingly assertive Beijing.

Chinese security have been stationed in semi-autonomous Hong Kong for the first time at the harbourfront West Kowloon rail terminus, as part of a new “special port area” that is subject to mainland law.

Despite critics’ fears over passenger safety in the mainland zones, hundreds gathered at the terminus, with the first train leaving for the southern Chinese city of Shenzhen at 7:00 am (2300 GMT Saturday).

“I’m not worried about the (mainland security) issue. They’re only here to work, the joint checkpoints are just to make things more convenient and make border-crossing clearance faster,” one 39-year-old passenger who gave his name as Mr. Chan told AFP.

Travellers cross through immigration and customs into the mainland-controlled portion of the station, which includes the platforms and the trains, even though West Kowloon is miles from the border further north.

Under Hong Kong’s mini-constitution — the Basic Law — China’s national laws do not apply to the city apart from in limited areas, including defence.

Hong Kong also enjoys rights unseen on the mainland, including freedom of speech, protected by a deal made before the city was handed back to China by Britain in 1997. But there are growing fears those liberties are being eroded.

Officials argue joint checkpoints will make journeys easier as passengers need no further clearance after crossing into the mainland.

The bullet trains to southern China promise to be far quicker than existing cross-border rail links, and long-haul services will cut journey times to Beijing from 24 hours to nine hours.

“This is definitely convenient in terms of time,” said one passenger who gave his name as Mr. Kwok and was taking a train to visit his ancestral home in the southern Chinese city of Chaozhou.

But he added that tickets were expensive and the purchasing system inefficient, having queued for four hours ahead of Sunday to buy them.

Opponents warn that giving away control of land in the heart of Hong Kong is a dangerous precedent as Beijing seeks to tighten its grip on the city following mass pro-democracy protests in 2014 and the emergence of an independence movement.

There are also questions over how Hong Kong citizens will be required to behave in the zones subject to Chinese law, whether they will be punished for using Facebook and Twitter — banned on the mainland — or targeted for wearing clothing with political slogans.

AFP journalists in the station Sunday could still access social media and websites, even when using a mainland Chinese WiFi provider.

On the train, passengers had to switch to a registered Chinese mobile number or WeChat account to access WiFi once they crossed into Shenzhen.

There are concerns too over the sharing of personal information with Chinese authorities.

However, pro-establishment lawmaker Regina Ip described the fears as “overblown”.

“(The rail link) provides unprecedented convenience of travel,” she said.

Travellers on the first service out of Hong Kong grappled with reversible seats that were pointing the wrong way, but the train left promptly, with doors closing at 6:59 am.

Mainland passengers arriving on early trains were greeted with “I love Hong Kong” mugs in goodie bags and signs welcoming them to the city.

One arrival who gave her name as Mrs. Tian, 64, said it was her first time in Hong Kong.

“It was too fast!” she said of the train, adding the journey had been “very comfortable”.

The special port area was quietly handed over to mainland personnel earlier in September.

The hush-hush ceremony took place at midnight and was not announced by the Hong Kong government until it was over. There was no media access. – AFP