Saturday, February 22
You are at:Home»News»Sabah»Shift from oil palm to tropical fruit industry 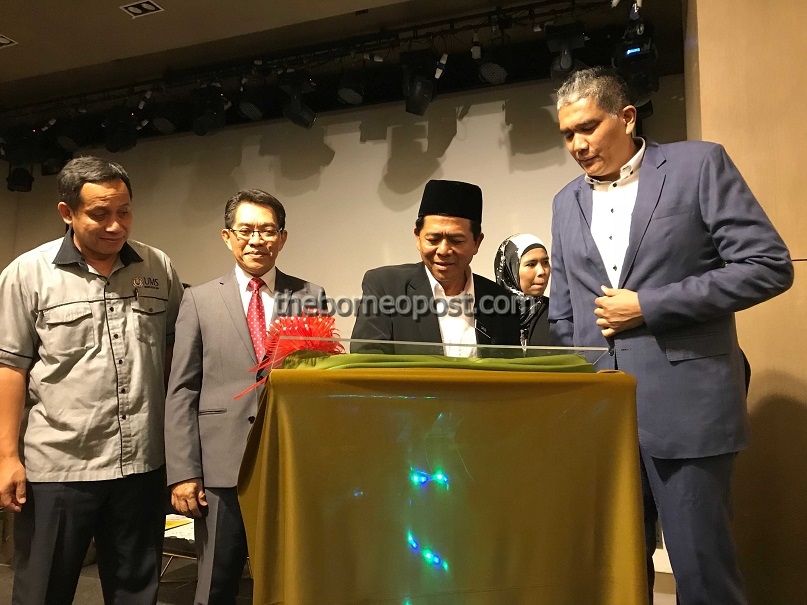 Daud (second right) launches the conference while from right, Sallehhuddin, Idrus and Kamaruddin look on.

He said tropical fruits like pineapples, durians, bananas and avocadoes also had huge market potential in the State.

Over the last two decades, Shafie said the tropical fruits industry had experienced a phenomenal growth as new markets were taking shape given the rising demand from consumers.

“The tropical fruit industry in Sabah has gained a new-found importance.

“The Sabah State Government acknowledges this, and thus seeks innovative and sustainable ways to develop the industry by diversifying away from traditional economic commodities such as oil palm or cocoa.”

He said the state Ministry of Agriculture and Food Industry advocated agricultural diversification, which entailed a shift from oil palm cultivation to alternatives such as tropical fruits to supplement local food demans as well as for foreign markets.

“This would definitely boost farmers’ income and encourages economic growth,” Shafie said in his speech delivered on his behalf by the Assistant Minister of Agriculture and Food Industry Dr Daud bin Yusof at the International Conference on Tropical Fruit Pests and Diseases here yesterday.

The conference is co-hosted by the Biotechnology Research Institute, Universiti Malaysia Sabah (UMS) and the International Tropical Fruit Network (TFNet) through support from the Ministry of Agriculture and Agro-based Industry, Malaysia.

For Sabah to position itself as a top tropical fruit producer in the region, Shafie said the State Government continued to strengthen its focus on research and development, quarantine enforcement and agropreneur development.

He said the government was aware of the challenges that faced the tropical fruits sector, including the emergence of pests and diseases, and viewed the issue seriously.

“State Government agencies such as the Department of Agriculture Sabah are taking precautionary measures to mitigate the spread of diseases by strengthening quarantine procedures and enforcement at all entry points in the State.”

For example, soil from outside Sabah is not allowed to be brought into the State. Fruits brought into Sabah require a permit from the State Agriculture Department.

“All these efforts have been heightened to prevent the repeat of similar incidences such as the Citrus Greening disease which wiped out the once flourishing industry of Sabah’s famed Limau Manis Beaufort.

“This happened due to the smuggling of citrus fruits from China.”

Meanwhile, Sabah Agriculture Department director Datuk Idrus Shafie said the State had embarked on a programme to diversify our agriculture by giving more focus to tropical fruits development, in line with the current national policy in giving importance to the development of the tropical fruits industry.

He said the effort to expand the tropical fruits industry under the proposed Southern Region Development Plan adopting the anchor-vendor approach would include a large scale cultivation of 5,000 hectares (ha) of durian, 1,000 ha of pineapple and 20,000 ha of coconut by 2035.

“Other fruits, in particular the indigenous fruits such as tarap and durian dalit, will be given due attention as it is popular among the tourists and also have the potential for export market.”

Idrus said pest and disease incidence needed to be managed for the well-being of the tropical fruits industry.

He said past experiences in Sabah showed that the Citrus Greening disease had reduced our citrus area from 1,517 ha to 213 ha.

The infestation of Cocoa Pod Borer (CPB) Conopomorpha cramerella has caused the downfall of cocoa, once dubbed as the golden crop of Sabah, from a planted area of 204,000 ha in the early 90s to a mere 6,911 ha in 2016.

Other diseases include the Papaya dieback and bacterial wilt in Saba banana variety.

He said addressing the issue of tropical fruit pests and diseases was particularly important for Malaysia.

“DAN has forecast that demand (for tropical fruits) will increase to 2.7 million metric tonnes by 2020 with a growth rate of 2.3 per annum.

“In addition, the market for fresh fruits is growing, driven by consumer preference for cultivating healthier eating habits.”

Kamarudin said the development of new technologies and innovations, such as computer applications and commercialized processes, that could be used to tackle the issue of falling global fruits production were anticipated.

“In the past, perhaps the adoption of such technology was challenging, especially for academicians, due to lack of funding and business links with the industry.”

Now, however, he said the nation was setting out with tremendous enthusiasm on the path towards scientific and technological modernization.

“Understanding that science and technology are productive forces, ministries have now offered various forms of support for those producing science-based products.”

He stressed that more research should be directed to the tropical fruits industry due to its importance locally and globally.