Thursday, August 18
You are at:Home»News»Sarawak»Rabies spreads to Sibu, Kapit, Miri 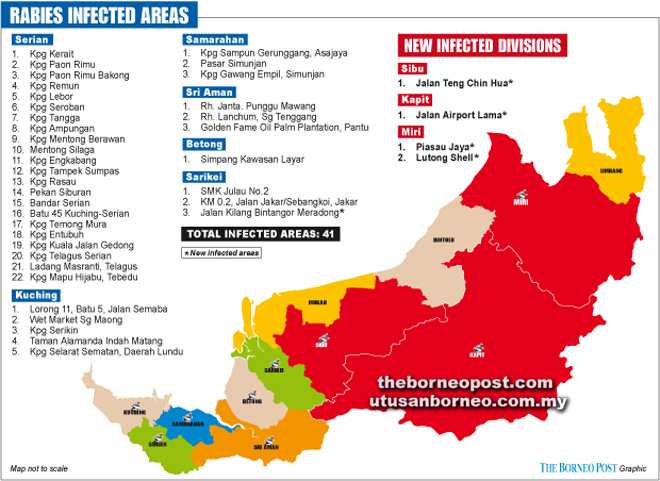 KUCHING: Rabies has spread to Sibu, Miri and Kapit divisions, making the total number of rabies localities to 41 thus far.

Responding to this latest spread of rabies in Sarawak, Datuk Amar Douglas Embass the committee chairman said in a press statement yesterday he is calling a full committee meeting next Tuesday to reassess the polices adopted in fighting the disease.

The meeting will also review the steps taken so far and explore new measures to curb the spread of the disease.

“Besides the existing committee, we are also inviting new bodies and NGO such as
SSPCA and Malaysian Medical council to attend the meeting,” he said.

The public are also advised to have their dogs vaccinated against rabies, and to call the nearest Veterinary Office if their pets show signs of rabies such as turning aggressive, biting of objects, excessive salivation and in-coordination.

Those who have not had their dogs vaccinated must bring them to the nearest Divisional Veterinary Office for anti-rabies vaccination from 8am to 10am from Monday to Friday (except public holiday) or to the nearest private veterinary clinics.

Annual booster is required to ensure that the pet is fully protected.

The public are also encouraged to communicate to the government through the above portals.

“No dogs are to be moved out from rabies infected areas without getting a written permission from the State Veterinary Authority,” Chuo warned yesterday.

Thus far, rabies on human has killed 12 people in Sarawak from the time it was first detected in June last year.

To mark World Rabies Awareness Day, The Borneo Post has teamed up with Sarawak Health Department and members of the local Dog Bite Clinic in Sarawak General Hospital (SGH) to help deliver a message to the public with the hope of raising awareness of the deadly virus — how to protect ourselves against it and the appropriate steps to take in the event of a dog bite.