Monday, September 26
You are at:Home»News»Sarawak»S’wak second in deaths at construction sites nationwide 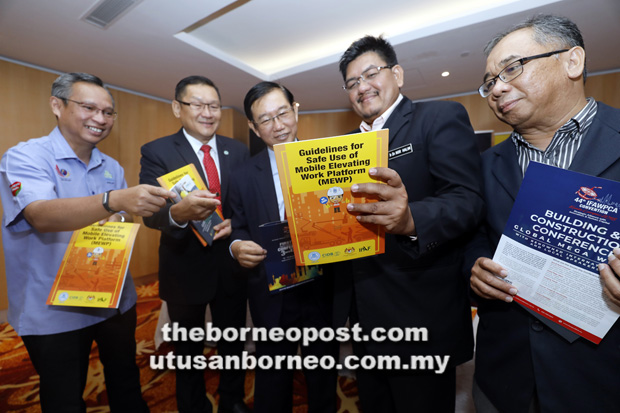 (From left) Philip, Yap, Foo, Nor Halim and Merzan take a closer look at MBAM’s Guidelines for Safe Use of Mobile Elevating Work Platform. — Photo by Chimon Upon

KUCHING: Sarawak now has the second highest construction sector-related fatality cases in the country, after Selangor.

Department of Occupational Safety and Health (DOSH) Sarawak director Ir Dr Nor Halim Hasan revealed that in the first eight months of this year, there were already 15 such cases recorded.

For the whole of last year, he said there were more than 30 fatalities in the construction industry in Sarawak out of the 183 cases recorded nationwide.

“Fatalities related to construction sector account for the most number of work place related fatal cases so far this year in Sarawak, which is 15 out of 26.

“Sarawak has second highest number in the country. We are concerned with this. Since Sarawak is vast, we are getting our offices in Kuching, Sibu, Bintulu and Miri to look after the construction activities in our effort to reduce the accidents and fatalities,” he told reporters here yesterday.

Earlier he officiated at the opening of Seminar on Occupational Safety and Health & Workshop on Construction Accident Investigations organised by Master Builders Association Malaysia (MBAM) at a leading hotel.

When asked where most of the fatalities were recorded he said the cases in the construction sector was not concentrated in one area.

“It is quite scattered. The number of cases recorded in Kuching, Sibu, Miri and Bintulu are more or less the same.”

Earlier in his speech, Nor Halim said a total 42,513 accidents at the workplace were recorded throughout Malaysia last year or equivalent to 116 cases on average daily.

Based on statistics recorded by DOSH, he said construction sector recorded most numbers of fatalities nationwide namely 183 deaths or 14.57 of every 100,000 workers.

“Accidents are costly. The victim’s family lost a breadwinner. The contractor lost a trained worker, and having to deal with costs incurred due to project being delayed, medical fees and insurance premium, as well as having to deal with authorities.

“Therefore, I urge all employers to be more committed in dealing with health and safety issues so that accidents related to construction sector can be reduced,” he said.

Meanwhile, MBAM president Foo Check Lee said one of the main contributors of the high construction accidents is working at height.

“The accidents may result from workers working at a high place without proper safety protection, hit by falling objects, accidents due to lifting using mobile or tower cranes, scaffolding failures, elevated working platform failures and so on.

“It is time for us as construction industry players to buck up and take safety and health seriously, and place them on high priority in the project implementation,” he said.

He also announced that among the efforts taken by MBAM on this matter was to publish Guidelines for Safe Use of Mobile Elevating Work Platform (MEWP), which is the first in the country and launched this
year.

More than 100 participants took part in the two-day seminar and workshop, jointly organised by MBAM with the Sarawak Building and Civil Engineering Contractors Association (SCBECA).

Kuching is the latest venue for the nationwide programme, after it was held in Penang, Kuala Lumpur and Kota Kinabalu. The next venue is Johor Bahru.

Previous ArticleRabies spreads to Sibu, Kapit, Miri
Next Article May challenges Trump with defence of multilateralism