Monday, May 10
You are at:Home»News»Sarawak»‘The Ranee: Margaret of Sarawak’ exhibition opens at Old Courthouse 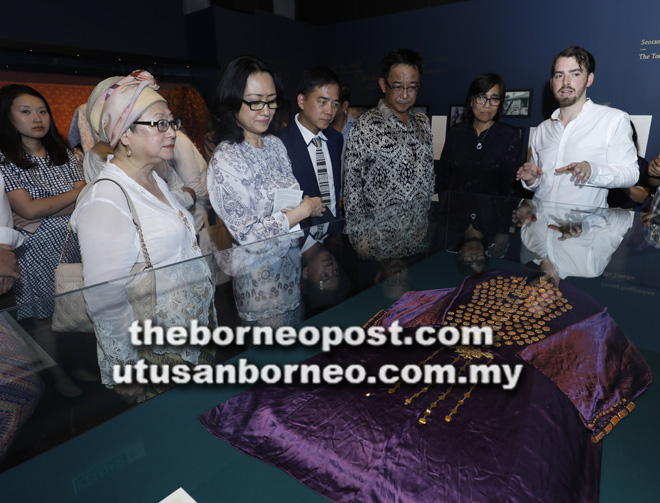 Brooke Trust director Jason Brooke (right) explains to Abdul Karim (third right) and other guests about the ‘kebarung’ which is one of Ranee Margaret’s collections. — Photo by Chimon Upon

KUCHING: The opening of ‘The Ranee: Margaret of Sarawak’ exhibition at the Old Courthouse here is in line with Sarawak government’s plan to turn Kuching into a city with soul and history.

Minister of Tourism, Arts, Culture, Youth and Sports Datuk Abdul Karim Rahman Hamzah, who said this, thanked Brooke Trust for bringing back the artifacts belonging to the late Ranee Margaret from England to Kuching.

Ranee Margaret or Margaret de Windt, married the second Rajah of Sarawak, Charles Vyner Brooke when she was 19 in 1868, and became the first Queen of the Kingdom of Sarawak back then.

According to Abdul Karim, Ranee Margaret was known as a strong lady and also for her appreciation of ‘keringkam’ which is woven cloth associated with the local Malays and her collection had been kept at the family’s home in England.

Abdul Karim also said that without Ranee Margaret, the iconic Astana would not have been built as it is today, while Fort Margherita was built by the Second Rajah and named after her (Margaret).

“This is definitely a tourism product, since we are going to turn Kuching into a city which has got a soul and rich in
history. We want to see many museums, many galleries in the city.

“This can be one of the places where visitors can come over if they want to know more about the heritage and  history of Sarawak and Kuching. For visitors, the moment they visit Fort Margherita, they must also visit this place,” he said after  officiating at the launch of the exhibition yesterday.

He described the exhibition as quite historic, in honour of a lady who played a big part in the history of Sarawak even though he conceded that not much of such information were mentioned in  history books.

of mainly keringkam and also kebarung by the late Ranee Margaret, were things which are very close to hearts of Sarawakians especially in Kuching.

“Those are quite a collection which she has got and showcased here today. It would really bring us back down memory lane. These are treasures for us, heritage to Sarawak.

“I wish to thank the Brooke Trust for willing to bring those things back to Sarawak. Otherwise, it would be somewhere in UK only. I am sure she (Ranee Margaret) would be proud ,” he said.

Meanwhile, Brooke Trust director Jason Desmond Anthony Brooke said the artifacts had been kept inside the family chests in England. According to him, the keringkam materials were more than 140 years old.

He thanked the Sarawak government, sponsors, and many local volunteers for their unwavering support to the works of the Trust and for sharing and exploring the elements that make up Sarawak’s unique history and heritage.

Jason Brooke, who is a grandson of the last Rajah Muda, said this one-of-a-kind exhibition was an extended project by the Brooke Trust, following the successful operation of the Brooke Gallery at Fort Margherita, the Trust’s flagship project which opened in Sept 2016.

‘The Ranee: Margaret of Sarawak’ is now welcoming visitors starting today (Sept 29). It opens daily (Mondays to Sundays) even public holidays from 9am to 4.45pm.