Wednesday, September 28
You are at:Home»Features»More than a thousand words: the power of photography 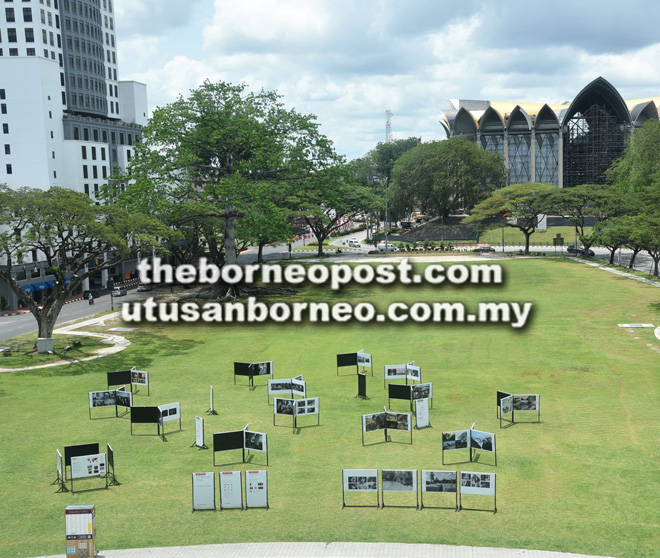 Photographs are a powerful medium. They are a form of documentation: they transcend cultural and language barriers, and they challenge storytelling.

It is all thanks to Leica and their invention of the 35mm cameras in the 1920s that disrupted media culture and society.

Photographs complement mundane texts; they entice a second look at a story, they can be provocative, heartbreaking, chaotic, exciting, confusing, comforting.

They can be anything. They can also be everything. 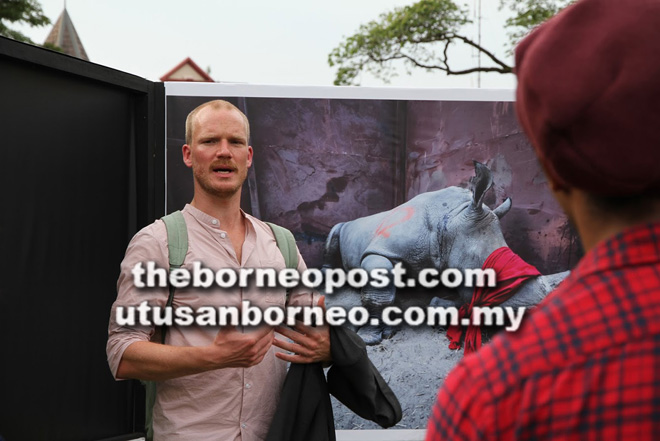 To kick off the What About Kuching (WAK) 2018 festival, and for the very first time, a World Press Photo (WPP) Exhibition is installed and launched at our very own iconic historical ground, the Padang Merdeka, Sept 29th.

The traveling exhibition is set to visit 100 different cities in 45 countries over the course of the year.

The theme, Stories that Matter, fits in well within WAK’s mission statement “from the people, for the people.” The 66 award-winning photographs are from WPP’s 61st photo contest.

They were selected from a total of 73,044 submissions, taken by 4,548 photographers from 125 different countries.

The photos are a showcase with the objective “to allow these Stories that Matter to reach out to us, to make us think about to-day’s world and to start a discussion around these subjects.” A series of lectures were also held at the Waterfront Hotel on the 101 of visual and constructive journalism and ethics surrounding pho-tojournalism by Laurens Korteweg, Director of Exhibitions at the World Press Photo Foundation following the launch.

A few days ago, Hans van de Bunte, the Project Director of the Sarawak Museum Campus Project suggested that I contribute my two cents on the exhibition.

I immediately reached out to Jee Foong, Kuching’s very own street photographer.

We visited the exhibition to-gether, observed, discussed, analysed, and pondered.

This article is written based on my personal view as an academician, and it might resonate differently to others. I don’t live in America. I do not experience the wrath of radical white supremacists. I don’t see people running down the street every day avoiding terrorist bombers.

We analyse these photos without having the familiarity of the experiences and narratives, so it raises the question if these photos are somewhat dehumanised? There is a cultural dissonance when viewing these photos, and it is not something that I, and a lot of Kuchingites, are familiar with in real life.

We probably only learn about it in the media.

Perhaps it would be meaningful and familiar to our community if this was an exhibition on the MH17 tragedy. But I also want to try to understand.

Every story, every photo, every experience, they take place somewhere.

We spend most of our lives growing up in this small city Kuching, where it can be described as a fairly idyllic place.

Looking at the photos that are exhibited at the Padang, trying to relate to the experience of war, public shooting, fascism are foreign concepts.

The national and public strive and grief of being attacked by terrorists is uncommon, if we compare to the people in the photographs, who experience it, often on a regular basis. 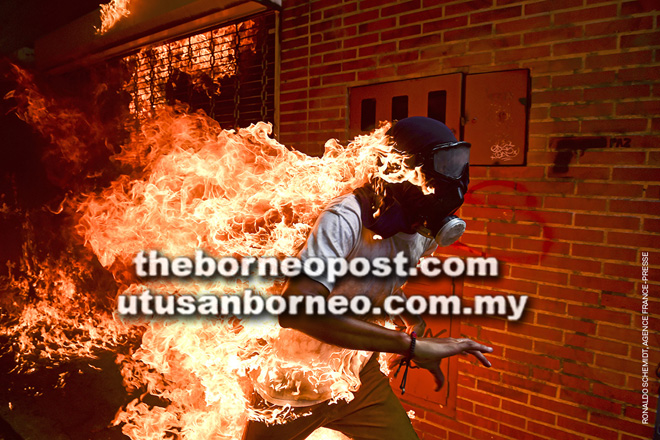 If you look closely, there is one small detail on the award-winning Burning Man photo: there is a mural illustration of a gun on the wall. It reads Paz, which means peace in Spanish.

The next one that caught my attention was the Car Attack in Charlottesville.

People on the street were hurled into the air, rammed by moving vehicles, while there are signs in the background that reads Solidarity.

All of the little details surrounding the objects or subject matter can help inform us better and to be more objective to the message that the photographer is trying to frame and tell.

Despite the disconnection that removes most of us here from the real-life experience of the subject, the photos can encourage and provoke critical discussion and conversation.

They empowered me to be more curious, and it made me think of the other parts unknown.

It made me think of the horror of war, racism, power, politics, environmental issues, but also how people are coping, how much effort something takes and what makes a human being human.

The questions of ethics in visual journalism were also raised during our discussion.

The Resignation Syndrome photo, portraying two bedridden, unresponsive young refugees sparked a question: who gave consent for them to be photographed? Is it ethical? And then it took me back to the iconic Pulitzer Prize-winning photograph, the Napalm Girl of Trang Bang, which was also chosen as WPP Photo of the year in 1973.

Ethical questions rose surrounding the process of shooting such images, for instance, do we help first, or shoot first? But she is naked, so do we publish it, or not? In 2016, Facebook briefly removed the photo of the Napalm Girl (although it was reinstated immediately), because it violated the company’s nudity policy.

It raised many arguments, but it became a symbol of the brutality of napalm and the Vietnam war.

It might not be the reason the war stopped, but it definitely changed something.

Back to the exhibition, other potential ‘sensitive’ images would also include Girls and More Than a Woman.

If there is one issue that I have with the curation of this exhibit, it is that the photographer’s own narrative and stories of their subject and their work are not always clearly described or included in the exhibition panels.

Again, this creates more disconnection between the photographer, the subjects, the audience, and the story.

But this can be rectified: perhaps when you go down to the Padang to have a look at these images, which can be something deemed controver-sial to society, I urge everyone to also go online, google the photographers and read up more about their projects and subjects.

I guarantee you, your perspectives and views of the subjects and the reasons to frame them in such a way will be different and mind-opening.

Nevertheless, an exhibition such as this gives us more opportunity to be one step closer to observe and learn about fundamental and impactful global issues that we rarely encounter in our own backyard.

It is a chance to explore alternative educational material, and we are not confined by our formal textbooks.

While the exhibition is going to be around for the whole of October, I urge teachers and schools to bring their students out to the Padang to observe and have a con-versation about the world out there.

Because when we see, we engage, we are more involved.

After all… I am bound, you are bound, to everyone on this planet by six degrees of separation.

The exhibition is open to the public from Saturday, Sept 29 to Sunday, Oct 28 at the Padang Merdeka in Kuching.

This travelling exhibition is co-organised by What About Kuching festival and the Sarawak Museum Department, and is generously sponsored by the Netherlands Embassy in Kuala Lumpur and Swinburne University of Technology Sarawak.

The design and installation of the exhibition is supported by the Lim Kok Wing Institute of Creative Technology Kuching.