Thursday, October 6
You are at:Home»News»Nation»Standing firm over oil and gas 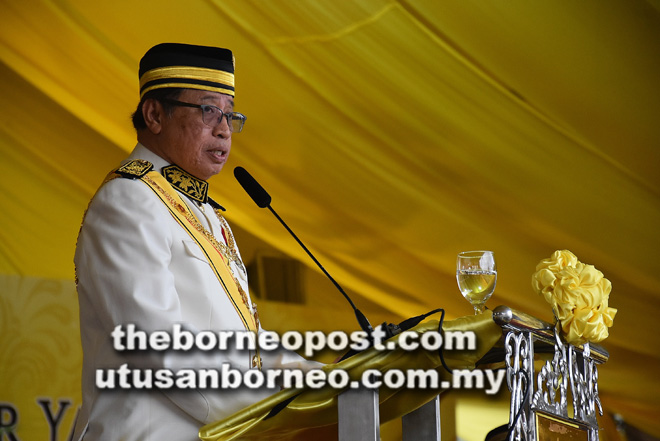 Abang Johari addressing the crowd at the rally.

SIBU: Chief Minister Datuk Patinggi Abang Johari Tun Openg has reiterated that Sarawak will not compromise on regulatory rights over its oil and gas activities.

He said the state had amended its Oil Mining Ordinance (OMO) 1958 to further strengthen the regulatory rights over oil and gas activities in Sarawak.

“I would like to assure you once again that we will not compromise on the issue of Sarawak oil and gas. The oil and gas are ours and the OMO 1958 gave us full control over oil and gas in our state.

“Other parties (industry players) can develop our resources and our gas but they cannot do so if they do not have licences issued by the State of Sarawak through PETROS (Petroleum Sarawak Bhd),” he said during the parade and rally in conjunction with Sarawak Yang di-Pertua Negeri Tun Abdul Taib Mahmud’s 82nd birthday celebration at Dataran Tun Tuanku Haji Bujang here yesterday.

Abang Johari said Sarawak also wanted all its rights under the Malaysia Agreement 1963 (MA1963) and Federal Constitution to be fully returned to the state.

“Just like Sabah, we are ready to hold discussions with the federal government to find an immediate solution to restore the complete rights of Sarawak as signed by our leaders in 1963, no more no less. We will not agree to anything less,” he said.

Meanwhile, he said Sarawak’s economic growth rate was 4.7 per cent in 2017 following the strengthening of the global economy.

The total trade recorded an increase to RM137.6 billion as exports grew strongly together with the economic improvements in several other countries.

According to Abang Johari, this year, Sarawak’s economy is expected to continue to record a growth of 4.0 to 4.5 per cent.

The high commodity prices are expected to support export growth.

However, he said, the trade war between China and the US will have an effect on Sarawak’s trade but the state government is hoping for the best.

According to him, Sarawak could not rely heavily on the oil and gas sector or on agricultural commodities to boost economic growth as they are influenced by various fluctuations in the global market, but (need) to add more value to the products and create more downstream activities to support higher economic growth.

“This includes developing a Digital Economy where technology will become the basis of our economic growth,” he said. — Bernama

Previous Article‘Number of dogs vaccinated below expectation’
Next Article More than a thousand words: the power of photography