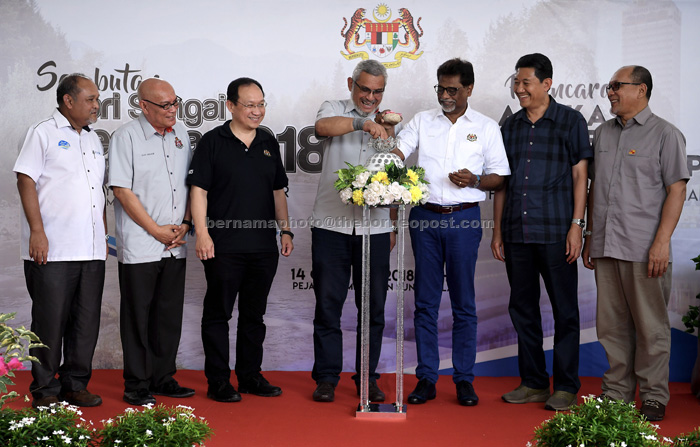 KUALA LUMPUR: The irresponsible attitude of local residents, increased population and logging activities are among factors that contribute to river pollution in Kuala Lumpur and several other areas in the country, said Water, Land and Natural Resources Minister Dr A Xavier Jayakumar.

He said the ministry, through its various agencies, would continue to play their role to conserve and preserve the environment.

As such, close cooperation between the ministry and the state governments, as well as the relevant ministries, is crucial to intensify efforts to educate and make the public aware on the importance of keeping their rivers clean.

They should not throw rubbish in the rivers, he told a media conference after opening the World Rivers’ Day here yesterday.

Also present was Federal Territories Minister  Khalid Abdul Samad. According to Xavier, the most polluted rivers are in Kelantan, Pahang, Kedah and Perak and the problem is caused by logging activities.

Meanwhile, Khalid said the Federal Territories Ministry was committed to continue with the River of Life (ROL) project, expected to cost RM4 billion.

“ROL is a programme intended to change the landscape of Kuala Lumpur, improving the quality of life of the riverine residents in the capital city, as well as to boost economy.

“However, the investment will be meaningless if there is no assistance and awareness from the public to maintain (cleanliness) and appreciate our rivers,” he said.

The ROL, which was launched in 2011, is a pioneer project under the Greater Kuala Lumpur/Klang Valley initiative and will make Kuala Lumpur a world-class city.

It is aimed at reviving the Klang River and Gombak River within the city and transforming the banks into waterfront areas with economic and commercial value through river cleaning, beautification and land development.

Khalid also advised the public to lodge report on activities carried out by any quarters that contributed to river pollution.

He said they could also through an application called a ‘Citizen’s Eye’ which could be downloaded through the apps store or play store applications on their smartphones. — Bernama