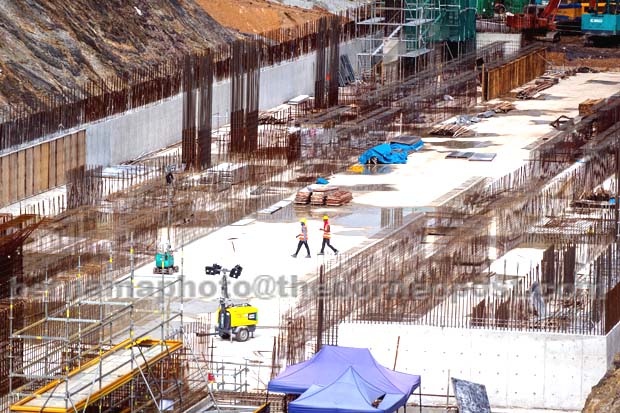 Analysts have kept their ‘neutral’ view on the construction sector following the release of the mid-term review of the 11MP but they believe that the slew of high impact projects announced should also signal the sector’s sustainability. — Bernama photo

KUCHING: Analysts have kept their ‘neutral’ view on the construction sector following the release of the mid-term review of the 11th Malaysia Plan 2016-20 (11MP) on Thursday.

However, they believe that the slew of high impact projects announced should also signal the sector’s sustainability.

According to the report, public investment is projected to contract at 0.8 per cent per annum, due to the revision of major infrastructure projects such as the East Coast Rail Link and High Speed Rail.

However, the Government remains committed to meet the socioeconomic needs of the rakyat by undertaking high-impact projects. In addition, public school projects across the nation as well as rural water and electricity supply projects in Sabah and Sarawak will further enhance the wellbeing of the rakyat.

There are also selected high-impact projects being planned or implemented from 2018 to 2020 and these include the Mass Rapid Transit 2 (MRT 2), Light Rail Transit 3 (LRT 3), Digital Free Trade Zone, Rapid Transit System Johor Bahru-Singapore, and more.

Sabah, Sarawak, Kelantan, Terengganu, Kedah and Perlis will also be given priority in the distribution of development allocations to promote more balanced socioeconomic development. The government will continue to leverage on the four major cities identified, ie, Kuala Lumpur, Johor Bahru, Kuching and Kota Kinabalu, to accelerate economic growth under the City Competitiveness Master Plan (CCMP) for each city. CCMP studies for Georgetown and Kuantan will be undertaken during the remaining Plan period.

The research team at MIDF Amanah Investment Bank Bhd (MIDF Research) opined: “We believe the slew of high impact projects announced should signal the sector’s sustainability. This would keep the

construction companies busy for the next two years, with public projects segmented into transportation, education, water infrastructure, and healthcare.”

Based on the 11MP review, the research team noted that the local economic performance has been on a steady trend, growing by five per cent on average since 2016, with the construction sector commanding about 4.6 per cent of total GDP at the tune of RM53.6 billion in 2017.

Despite the strong growth of 6.8 per cent posted last year, it pointed out that the sector was expected to slow down an annual average of 4.3 per cent in the near term. Notably, the downtrend was also attributable to slower growth of residential and non-residential subsectors.

“This was also due to contraction in public investment of 0.8 per cent per annum, subsequent to the revision of major infrastructure projects namely the East Coast Rail Link and High Speed Rail.

“While this could deter construction activities in the near term, we opine that the decision was necessary as the government rationalised its fiscal position,” it added.

As the sector progresses, MIDF Research pointed out that there are still issues and challenges faced by construction companies.

“For example, the heavy reliance on low-skilled workers remained a pertinent challenge as companies strive to increase its margin. On top of this, the upward revision on wages would likely exert additional pressure, as the industry continues to be labour-intensive.

“While part of this problem could be mitigated with the use of IBS (Industrialised Building System), we opine that domestic players have not entirely embraced the technology,” it opined.

Overall, MIDF Research pegged a ‘neutral’ stance on the sector. It explained: “This is considering the expectation of moderated growth in the near term, as the new government recalibrate its direction.

While we see the slew of high impact projects announced to be positive, it is not adequate to excite the market.

“All things considered, FY19 is expected to be a humdrum year for construction companies.”

Meanwhile, the research team at Affin Hwang Investment Bank Bhd (AffinHwang), which also retained its ‘neutral’ view on the stock, said that it is cautious on the sector due to the risk of order book reductions with cost cuts for infrastructure projects.

“We estimate the potential large-scale infrastructure projects to be implemented from 2019 onwards to be worth about RM65 billion with the inclusion of the RTS project. New contract procurement prospects remain challenging for the contractors pending the review and re-prioritising of government projects,” it explained.

However, it noted: “We favour contractors that have been securing projects on an open-tender basis, which is the transparent process favoured by the new government.”