Sunday, November 1
You are at:Home»News»Sarawak»Ministry: Sarawak set to reach target of 50,000 tourist arrivals from China this year 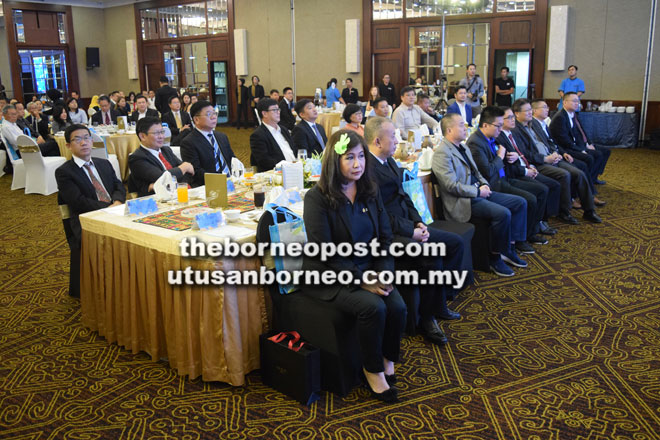 Guests and representatives from China listen to the welcoming speech. — Photo by Roystein Emmor

KUCHING: The Ministry of Tourism, Arts, Culture, Youth and Sports is optimistic about tourist arrivals from China hitting this year’s target of 50,000, following the launch of the Kuching-Shenzhen direct flight route last December.

According to principal assistant secretary to the ministry Jee Chin Fu, the arrival of tourists from Mainland China grew by 20 per cent in the first half of the year, over the same period last year.

“With this, we can hit the target of having 50,000 tourists arriving from China this year,” he spoke during the ‘Hainan International Tourism Island Promotional Event’ at a hotel here yesterday.

Jee pointed out that Sarawak has 52 national parks, which could become a selling point to Mainland Chinese tourists, particularly those residing in major cities.

He believed that travellers from places where the winter time could get harsh would not mind a trip to Sarawak where it is warm all year through.

“On top of the beaches and sunshine, we have rainforests too,” he said, adding that those from the ‘big cities’ could enjoy fresh air.

The event yesterday hosted 120 guests and representatives from the Department of Tourism, Culture, Radio, Television and Sports of Hainan Province, including the department’s International Marketing Division deputy director Fu Fenghua – who said the province received a good number of tourists from Malaysia last year.

“Malaysia was fourth in terms of tourist arrivals in Hainan, after Russia, Indonesia and South Korea,” said Fu, adding that the province received more than one million international tourists last year.

According to him, the existing direct flights between Malaysia and Hainan comprise Kuala Lumpur-Hainan, Penang-Hainan and Johor Bahru-Hainan routes.