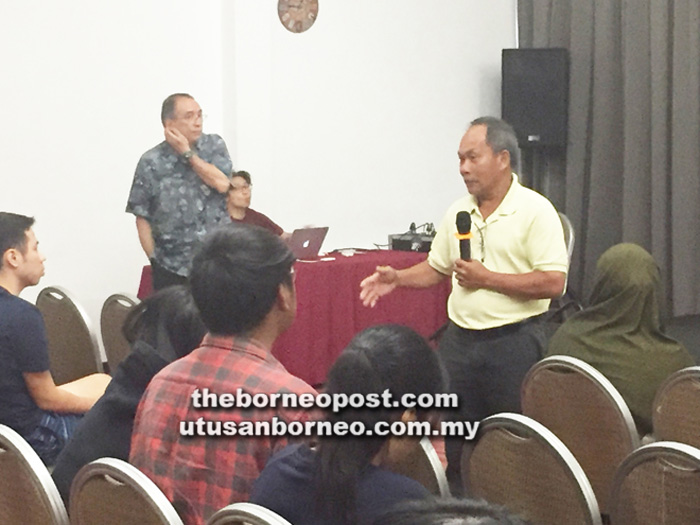 Awang Ahmad presents a briefing to the audience prior to the screening.

The films screened were short, but they provoked audience’s reaction with questions about what they were shown or comments about how it made them feel.

According to Awang Ahmad Awang Ali from Pusat Latihan Orang Asal Sarawak (Panggau), the films selected for the screening here were either Sarawakian films or those on relevant issues.

“These are not mainstream films. It’s more for education.

“As local organisers, we hope this would strike a chord so we could talk about it.”

He said some people still don’t know about basic human rights – some of the films touched on issues that those attending could talk about.

“In ‘New Malaysia’, we are looking at changes, and our expectations include better human rights,” said Awang Ahmad.

‘Mend The Gap’ which drew inspiration from the United Nations 2030 Agenda for Sustainable Development, which states that ‘no one should be left behind’.

In light of the recent changes in Malaysia’s political landscape and in the spirit of ‘Malaysia Baru’ (New Malaysia), FFF aims to harness the power of films and great storytelling to create more awareness and empathy, as well as facilitate deeper exchange between groups in order to close these gaps and inspire real changes.

The education of stateless children in Sabah is portrayed in ‘Aku Mau Sekolah’ (‘I Want To Go To School’) by Putri Purnama Sagua; the issue of adequate maternal healthcare in rural Sarawak is being told in ‘The Story of Kam Agong’ by Lawrence Jayaraj, Agnes Padan and Wong Chin Hor; and the rights of the differently-abled to an independent and dignified life is recounted in ‘In The Dark’ by Low Watan.

Another important theme that requires urgent attention is that of sex education, as depicted in ‘Kantoi’ (Caught Red-handed) by Adam Zainal, while an interesting local documentary narrates the lives of boat drivers in the Muara Tuang ferry base entitled ‘Story Between Two Riverbeds’ by Nur Kursyiah Matali.

Additionally, FFF 2018 aims to raise awareness of how Malaysian higher education institutions fail to fulfil the dreams and aspirations of Orang Asli (indigenous) youths through the screening of ‘Tak Kesampaian’ (Unfulfilled) by Shafie Dris.

Also screened for the first time in Sarawak was the celebrated international documentary ‘Joshua: Teenager vs Superpower’ by Joe Piscatella, which showcases the experience of young activists from Hong Kong’s umbrella movement.