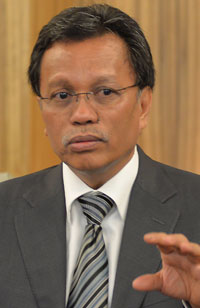 KOTA KINABALU: The State Government will find an ‘amicable’ solution to address the concerns of the environmentalists on the proposed construction of the Papar Dam, said Chief Minister Datuk Seri Shafie Apdal.

“We (the State Government) know the necessity for us to get water supply. We did a finding and found out that, without building another dam nearer to Kota Kinabalu, it will somehow affect the water supply in less than five years.

“I am concerned for the millions of people residing in Kota Kinabalu, including districts like Papar,” Shafie told reporters when met during Water, Land and Natural Resources Minister Dr A Xavier Jayakumar’s courtesy call to his office on Tuesday.

“We cannot just listen to NGOs criticizing us. At the end of the day, if there’s no water, there will be many more NGOs coming up with empty buckets of water.

“We should take an amicable solution to this, with interest to provide ample water,” he added, stressing that the State Government was aware of the potential environmental problems.

He said the State Government would try to engage with the NGOs concerned as it is ready to hear the opinions from different sides.

According to Shafie, it would be costly for the State Government to obtain water supply from remote areas such as Tambunan or Kota Belud (which is used for paddy plantation).

“If this can be realized, within a short period of time, it can benefit the people and the state,” he said.