Thursday, February 2
You are at:Home»News»Nation»Judge: Najib must be present in court for his case
For the freshest news, join The Borneo Post's Telegram Channel and The Borneo Post on Newswav. 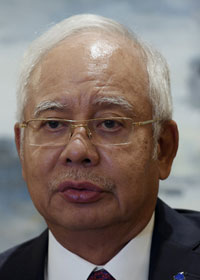 High Court judge Mohd Nazlan Mohd Ghazali said the accused (Najib) should be in the proceedings so that he could follow his case directly.

“I think he (the accused) should be here (in court), if the matter is not contested, then we can consider. At least the accused may directly follow the proceedings,” the judge said.

Mohd Nazlan made the ruling after Najib’s lawyer Tan Sri Muhammad Shafee Abdullah applied for his client to be exempted from attending the next case management which was fixed on Nov 29.

Muhammad Shafee had asked the court to excuse his client from attending the upcoming proceedings as case management normally involved only the prosecutors and the lawyers.

Senior lawyer Datuk Sulaiman Abdullah, who was appointed by the Attorney-General’s Chambers to lead the prosecution team countered that Najib should turn up for his proceedings.

“I personally feel that in a case of this importance, the accused should attend it. We do not have an instruction for this, this is my opinion, but I leave it to the court to decide,” he said.

Earlier, Sulaiman informed the court that the prosecution had served 29 volumes of documents pertaining to the case according to Section 51A of Criminal of Procedure Code to the defence team on Oct 18.

Co-counsel for Najib, Harvinderjit Singh, however, said the defence had yet to receive statements recorded by the Malaysian Anti-Corruption Commission (MACC) from all the witnesses.

The court then set the same date (Nov 29) to hear the notice of motion by the defence pertaining to the delivery of MACC documents to the defence.

On another issue, Sulaiman told the court that the prosecution had sent a letter to the Chief Judge of Malaya Tan Sri Zaharah Ibrahim for the case to be heard in the Palace of Justice, but the defence had objected to the prosecution’s request.

“At the moment, we are awaiting decision from the Chief Judge of Malaya,” he said.

His wife, Datin Seri Rosmah Mansor was also present in court yesterday and sat at the public gallery. — Bernama

Previous Article‘Cervical cancer second most common cause of deaths in women, 2 to 3 cases in SGH every week’
Next Article B40 health protection scheme to be fully financed by government, says Dr Dzulkefly