Friday, December 3
You are at:Home»World»Trump threatens to shoot migrants who throw stones 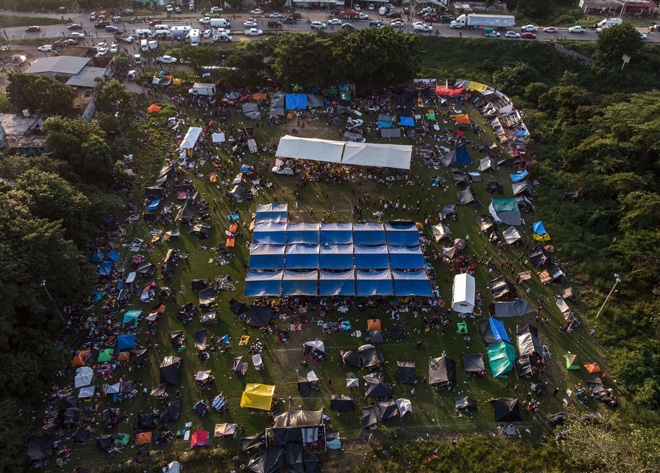 Aerial view of a temporary shelter for Honduran migrants, taking part in a caravan heading to the US, set up at a football field in Matias Romero, Oaxaca State, Mexico. — AFP photo

WASHINGTON: President Donald Trump on Thursday warned that soldiers deployed to the Mexican border could shoot Central American migrants who throw stones at them while attempting to cross illegally.

Trump told journalists at the White House that a group of several thousand migrants walking through Mexico towards the US border had thrown rocks ‘viciously and violently’ at Mexican police.

“We’re not going to put up with that. They want to throw rocks at our military, our military fights back,” he said.

“I told them (troops) consider it (a rock) a rifle. When they throw rocks like they did at the Mexican military and police, I say consider it a rifle.”

Trump spoke during a presentation of his controversial policy on cracking down against what he says is uncontrolled illegal immigration.

Contacted for comment, Pentagon spokesman Army Lieutenant Colonel Jamie Davis said the military would not discuss hypothetical situations on the use of force “but our forces are trained professionals who always have the inherent right of self-defense.”

“I would also emphasize that our forces are in support of DHS/CBP, who are performing law enforcement activities,” he added, referring to the frontline Department of Homeland Security and Customs and Border Protection.

Trump has ramped up the rhetoric daily ahead of next Tuesday’s midterm congressional elections, accusing the opposition Democrats of wanting to throw open the borders to floods of “tough people,” “rapists” and other types of threats.

The current focus of the president’s repeated claim to be acting against “an invasion” is the dwindling group of a few thousand impoverished migrants trying to get north, but still far from the US border.

Trump said that from now on, the United States will stop its policy of allowing people to claim political asylum at the border unless they have first gone through an official border post.

Those caught at the border will be held in tent camps or other facilities until they can be deported or have their requests approved, he said.

Critics say that such a radical rethink to asylum policies could violate current laws.

But Trump rejected this.

“This is totally legal. No, we’re stopping people at the border. This is an invasion, and nobody is even questioning that,” he said.

Despite Trump’s increasingly severe warnings of immigration chaos, the government on Wednesday issued figures saying that only about 400,000 people have been apprehended at the border in 2018, down from around 1.6 million in 2000.

Trump said he was not anti-immigrant but wanted immigration to be completely brought under control.

“Mass uncontrolled immigration is especially unfair to the many wonderful law-abiding immigrants already living here who followed the rules and waited their turn,” he said.