Saturday, September 26
You are at:Home»News»Sarawak»Housing scheme for longhouse folk mulled 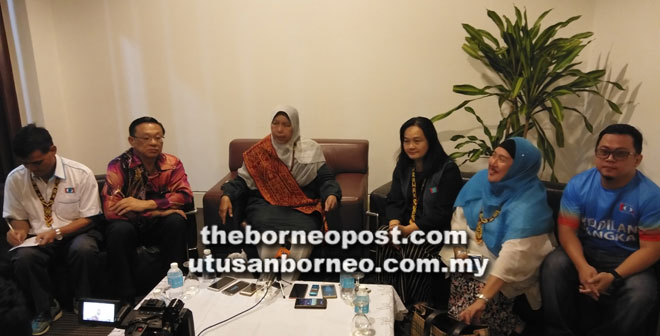 Zuraida (third left) fields questions from reporters. With her are (from left) Chen, Teo, Voon and other local PKR members.

SIBU: Housing and Local Government Ministry may look into the possibility of having a new housing scheme for longhouse residents categorised under the B40 group – namely those in the bottom 40 per cent of the population.

Minister Zuraida Kamaruddin, however, said she could not make any promise for now as the matter would need to be studied further.

In this regard, she stressed about the need to ‘sit down and look holistically’ into coming up with a long-term plan to assist the longhouse folk.

“I can’t promise – this is something that I have to study – probably, we are going towards that direction,” she said in response to the question about her ministry coming up with a new housing scheme for longhouse residents in Sarawak.

Speaking at press conference here yesterday, Zuraida highlighted about the need to bring longhouses into the mainstream housing agenda.

“With regard to longhouses, we have sort of neglected them. Now, I think they should go into the mainstream housing agenda – when they need upgrading (works) on their longhouses, or build new ones.

“I think this is something that we have to look into because they are part of the B40 group. So, we should be looking into that – this something that I will bring back and look into the housing problems of the ‘Orang Asal’ (indigenous people), especially (those) in Sarawak.

“We will have to bring longhouses into the mainstream (housing) agenda. We have to look into it categorically.”

Pressed further Zuraida, who is Ampang MP, said her ministry would need to review the distribution of the longhouses and their numbers.

“I have to take stock of the statistics and see where are the places that we need to upgrade. It is just like the normal PPR (People’s Housing Programme) homes that we are doing.

“So, we have to do the same thing with the longhouses.

“I will go back, get the figures and look into how we can help these longhouses. I think they should be given attention to improve their living standards and their homes must be liveable,” she pointed out.

On another matter, Zuraida disclosed that there would be another 140 new Fire and Rescue stations to be built across the country.

“I am sure some (stations) will be built in Sarawak. This year alone, we have built 40 new ones – I think Kanowit is one of them, besides Selangau.

“Definitely, there is a need to build (stations) especially near the longhouse areas.”

For a start, Zuraida said fire extinguishing units would be provided to longhouse residents, and ‘Fire and Rescue’ communities would be formed to help in firefighting.

On Rumah Unggkang, she was informed that it was damaged by fire about seven years ago – rendering it in dire need of repairs and power supply.

In this respect, she said she had appointed Parti Keadilan Rakyat (PKR) Kanowit branch secretary George Chen as the special officer to assist her in affairs concerning Sarawak’s central zone.

She also said Chen would look into the matter.

Other issues raised by the people during her visit here included Native Customary Rights (NCR), certain longhouse chiefs not receiving their salaries and roads.

According to Chen, about 20 letters had been received – all requesting for upgrade in living conditions in the rural areas.