Sunday, November 1
You are at:Home»News»Nation»More than 1,000 people gathered in Federal Capital to protest ICERD 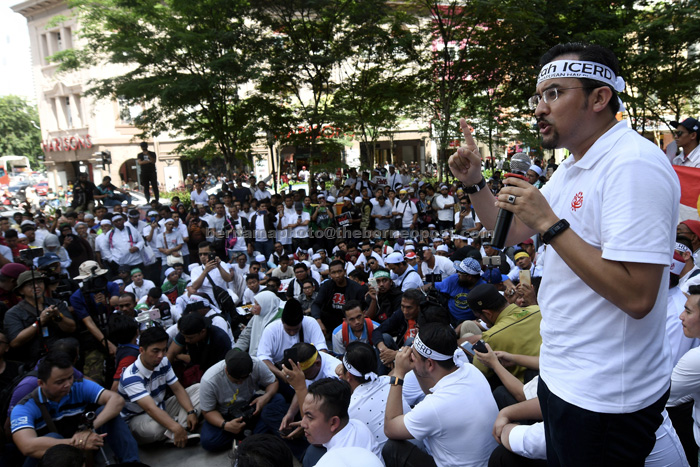 Asyraf is seen participating in the protest against the International Convention on the Elimination of ALL Forms of Racial Discrimination (ICERD) in Kuala Lumpur. — Bernama photo

KUALA LUMPUR: More than 1,000 people attended a gathering organised by Umno and PAS youth wings yesterday to protest against the International Convention on the Elimination of ALL Forms of Racial Discrimination  (ICERD).

It was held in the vicinity of Masjid Jamek here where the crowd, comprising representatives from non-governmental organisations and mostly dressed in white, began to gather at noon.

No untoward incident had been reported so far.

Last Wednesday, Prime Minister Tun Dr Mahathir Mohamad said Malaysia would only ratify ICERD after consulting all races in the country and admitted that it would not be easy as each race was sensitive to certain issues.

“The organisers abide by police order and they were allowed to march from Masjid Jamek to Jalan Tuanku Abdul Rahman,” he added.

However, Shaharuddin said the police would call the organisers to record their statements on the gathering.

“They did not serve any notice (to hold the gathering), but we receive information though the social media.

“All the participants adhered to police instruction and did not obstruct traffic, which made easy for the police to monitor.