Saturday, July 11
You are at:Home»News»Sarawak»Can Rafizi pull it off in Julau? 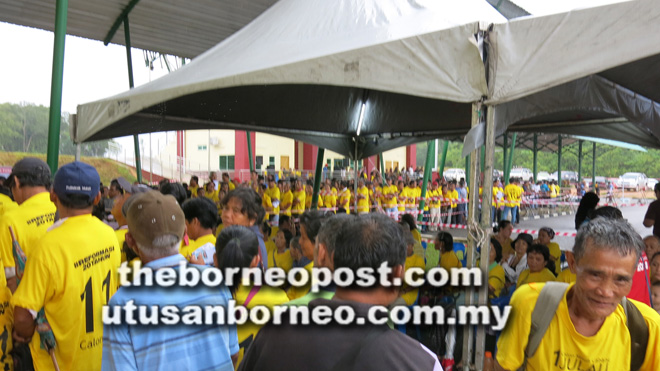 Voters in yellow shirts queue up in front of the polling centre.

JULAU: If the huge number of yellow shirts is anything to go by, the result of PKR election here yesterday would mean a win for a team aligned to Rafizi Ramli.

The about 3,000 voters who turned up at the sports complex here as early as 8am were supposed to vote for the ‘Reformasi 20 Tahun’ team aligned to Rafizi, who is involved in a straight contest with Azmin Ali for the party’s deputy president post.

However, many who donned the same yellow shirts were seen entering a rival booth, which almost sparked tension between the two groups.

Fortunately, it happened right under the noses of on-duty policemen who managed to calm down the situation.

Another tense situation happened when a member aligned to Azmin, Andy Wong Hong Yu, was denied entry into the polling station.

The situation was again successfully defused by the police.

For the record, Andy Wong who was PKR candidate for Julau in the 2013 general election, is involved in a straight fight with Arim Badok for the PKR Julau branch deputy chief post. He is teaming up with Semana Sawaing who is defending his Julau branch chief post.

Wong blamed the incident on a culture brought by supporters of contesting candidates from Peninsular Malaysia. He said there was no problem with the local voters as they considered the election a family affair.

Julau District police chief DSP Bidol Noyeng, when met at the scene, believed that many people among the crowd were just party supporters, and not eligible to vote.

Apart from slight misunderstanding at the registration booth and at the entrance to the polling station, the election process went smoothly, he said.

He warned that the police would not hesitate to act accordingly if the situation warranted it.

Meanwhile, a senior party member expected about 10,000 voters’ turnout at both Julau and Pakan polling stations.