Saturday, February 22
You are at:Home»Business»Biosecurity plan for oil palm to benefit industry 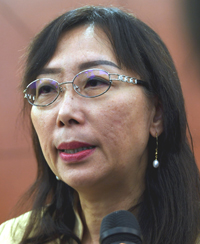 KAJANG: With the newly-launched Biosecurity Plan for oil palm in place, various agencies, the industry and stakeholders will be more committed and vigilant in responding to any potential intrusion of exotic pests and diseases into Malaysia.

This, will in turn, protect the health and yield of oil palm, said Minister of Primary Industries, Teresa Kok.

She said the Biosecurity Plan combined a strategic and integrated approach, encompassing policy and regulatory frameworks that analyse and manage risks in various sectors, including food safety, plant life and health, as well as those associated with environmental risks.

Mitigation measures at pre- and post border are also carefully aligned to reduce any epidemic outbreak in the country, she said.

“The Biosecurity Plan for oil palm launched today contains a series of operating procedures to protect against the entry of exotic pests and diseases.

“It includes strict protection at ports and airports and management of practices in plantation to further arrest and mitigate the risk of infestation,” Kok said in her speech at the launch of the Biosecurity Plan at the Malaysian Oil Palm Industry and Seminar yesterday.

She noted that the palm oil industry had contributed significantly to Malaysia’s economic growth, with RM77.8 billion in export revenue in 2017, while employing more than four million people across the value chain.

“The MPOB has collaborated with the Department of Agriculture, Malaysian Quarantine and Inspection Services, as well as the Centre for Agriculture and Biosciences International Southeast Asia to develop the Biosecurity Plan for oil palm as a comprehensive guideline for risk management and an emergency response plan for the Malaysian palm oil industry.

“I am sure that with the launch of this Biosecurity Plan, everyone will be well informed of oncoming threats, be adequately prepared and able to respond effectively to it,” he added.

Ahmad Kushairi said the MPOB had also formed a task force comprising experts from Colombia, the United States, the United Kingdom and Malaysia on bud rot disease, which has caused major losses in Latin America.

He also noted that two MPOB officers had completed their doctorates on the Fusarium wilt disease and bud rot disease.

“The MPOB has developed early detection kits to identify pathogens that causes Fusarium wilt and bud rot. It is hoped that these technologies will help reduce the chance of catastrophic pandemics,” he said. — Bernama