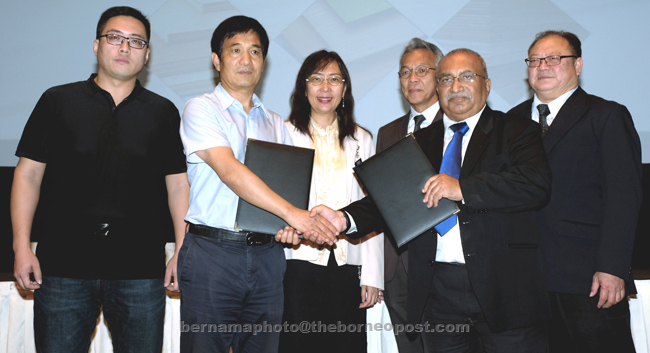 Kok (third left) witnesses the exchange of documents between Sheikh Othman (second right) and Xiyin (second left) as others look on. — Bernama photo

PUTRAJAYA: The Primary Industries Ministry has called for more research and development (R&D) on Oil Palm Trunk (OPT) as an alternative material for plywood production.

“There is a new alternative material for plywood production which is developed through the cooperation of agencies under the Primary Industries Ministry, namely the Malaysian Timber Industry Board and Malaysian Palm Oil Board as well as other agencies such as Forest Research Institute Malaysia (FRIM) and Universiti Putra Malaysia (UPM).

“I would like to see more R&D on downstream OPT products to be carried out by research organisations so more downstream OPT products can be produced,” she said at the Memorandum of Understanding signing between Malaysian Panel-Products Manufacturers’ Association (MPMA) and China’s Linyi Panel Products Chamber of Commerce here yesterday.

Kok also invited the chamber to be part of the research endeavour on OPT plywood.

“I applaud this private sector-driven initiative between MPMA and Linyi Panel Products Chamber of Commerce in strengthening the bilateral business cooperation between Malaysia and China,” she said.

Kok said exports of timber and timber products have reached RM14.57 billion, with exports of wood-based panels accounting for 30 per cent or RM4.35 billion as of August this year.

“The wood-based industry provides employment to approximately 300,000 people in the country,” she noted.

Kok added that China was the sixth largest importer of Malaysian timber products valued at RM1.12 billion last year, an increase of 31.9 per cent over 2016.

“As of August this year, total exports of timber and timber products from Malaysia to China stood at RM729.6 million, a 2.4 per cent increase compared to the corresponding period last year,” she said.

Later, Kok witnessed the signing of a cooperation agreement between MPMA and Linyi Panel Product Chamber of Commerce on the sharing of technical and business information to promote the panel industry in Malaysia and China.