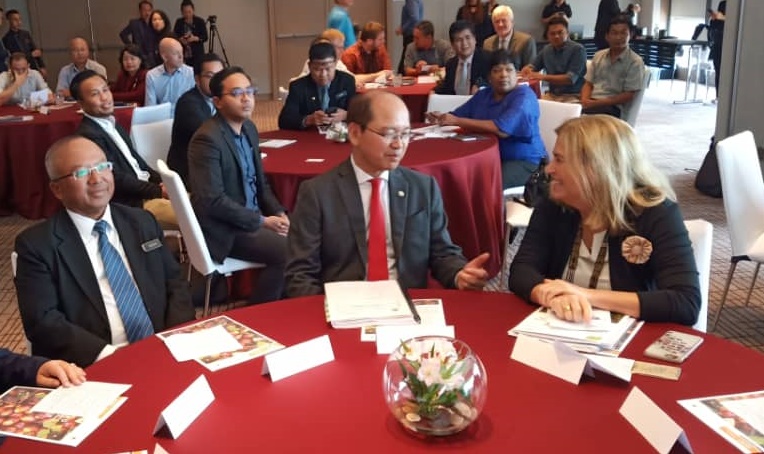 He added, however, the Ministry of Plantation Industries and Commodities (MPIC) announced that the MSPO Certification Scheme is now mandatory across the nation. All oil palm plantations within Malaysia are obligated to comply by the end-2019.

“In view of this, the state had also agreed to pursue the MSPO certification within the state. Both the Sabah JCSPO Initiative and the MSPO Certification will be implemented concurrently. After all, the goal is to bring about ‘Certified Sustainable Palm Oil’ to meet market demand,” he said.

“I understand that this decision might have stirred confusions in the market and possibly among the plantation players too. Thus, I wish to reaffirm that achieving the RSPO Certification, through the implementation of the Sabah JCSPO initiative is still the ultimate goal for Sabah.

Shafie, who is also state Finance Minister, said Sabah is all out for the certification of its oil palm and has long opted for the jurisdictional approach (JA).

He added this is happening due to reasons that include Sabah’s 12% export of the world’s Crude Oil Palm Oil (CPO) as the third largest producer after Indonesia and Peninsular Malaysia.

He said, today, about 24% of Sabah’s oil palm are already RSPO certified and the ultimate aim is to achieve 100% certification by 2025.

According to Shafie, among the international support received include an AAK (A Swedish Vegetable Oil Company) one-year grant to Forever Sabah to support smallholder work within Telupid, Tongod, Beluran and Kinabatangan (TTBK), which was renewed in 2018.

He added, through RSPO, the UNEP 10-year Food Program awarded USD200,000 and USD100,000 match from RSPO for over 22 months to be shared equally between Sabah and Central Kalimantan, which also supports smallholder work.

During the dialogue, Sabah will present its jurisdictional plan and process, and the state’s key package of specific asks and opportunities for partnerships.

The gathering was intended to create a robust, open space for a dialogue between Sabah and the internationals, where local goals and action find alignment with global goals and need for action.